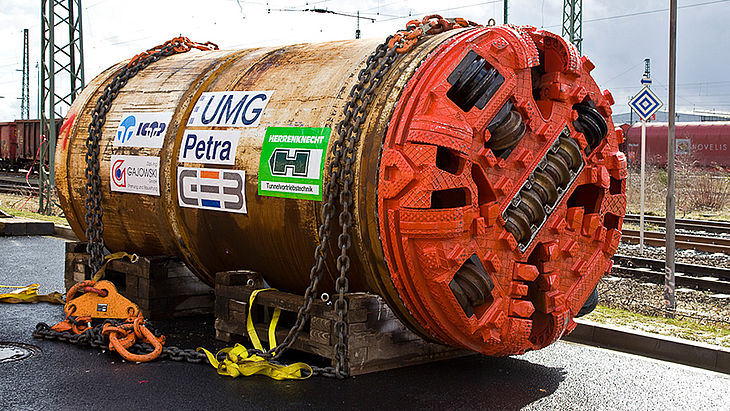 The University Hospital in Göttingen is located in a depression, which is why the storm water and sewage occurring here has to be pumped uphill for disposal with an elaborate pumping system. If the pumps fail, flooding could threaten the supply of power to the hospital buildings.

To ensure the safe and trouble-free disposal of surface water, in 2014 planning of a new storm water sewer began. Tight space conditions in the busy inner city area, highly heterogeneous geological conditions and the drilling of a complex S-curve characterize the project. To optimally overcome these challenges the contractor chose microtunnelling technology from Herrenknecht.

A total of three tunnel sections were drilled with three different Herrenknecht machines for the construction of the new sewer. The first of the three machines, an AVN1400TC, began the shortest section in August 2014: the length of the drive was 200 meters. In December 2014 the second machine was put to work, an AVND2000AB. It drilled the longest section of 650 meters. With a diameter of 2 meters, this serves as a reservoir. This means the water flow can be precisely controlled with a regulating plant. Shortly after, in January 2015 the last and second longest advance began with an AVND1800AB. Thanks to professional planning and precise drilling the gas, water, electricity and sewer lines in the center of Göttingen were navigated around thanks to several curves. The main traffic arteries also remained largely unaffected thanks to the trenchless construction method and residents were not burdened by dust and noise.

In May 2015 the last machine saw the light of day again in Göttingen. With the third breakthrough it was also time to celebrate the successful completion of the underground construction with the Herrenknecht microtunnelling machines. After only 9 months, with an average advance rate of approximately 13 meters per day and the installation of 400 jacking pipes, drilling was completed. Thanks to a natural slope of at least 2 parts per thousand (2 meters decline per 1,000 meters of length) the storm water and groundwater flows away by itself without the need for pumping. At a depth of 11 to 13 meters and over a distance of 1,210 meters it is directed first to the connecting sewer of the freight terminal and from there into the Lutter river.