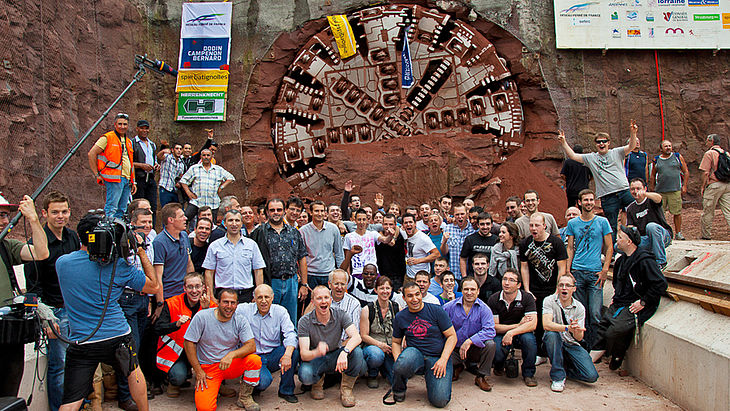 Until now, the French TGV needed two hours and 20 minutes for the journey from Paris to Strasbourg.  From Paris to Baudrecourt in Lorraine, the train runs on a high-speed route. The further extension to the east of 106 kilometers through Alsace to Strasbourg is being realized at top speed and will reduce the traveling time for passengers by a further 30 minutes by 2016. To cross through the Vosges mountains, the French tunnel constructors used a tunnel boring machine from Herrenknecht.

In November 2011, the TBM started tunnelling the almost four-kilometer-long northern tube on the eastern side of the Vosges mountains at the launch portal near Ernolsheim lès Saverne Two months ahead of the construction schedule, the machine completed tunnelling of the first tube on the western side of the Vosges mountains at the end of June 2012. During the seven-month period of excavation work, the jobsite teams achieved best performances of up to 46 meters per day and 250 meters per week.

The Herrenknecht tunnel boring machine named "Charlotte" (convertible EPB Shield S-670, Ø 10,010mm) was exactly adapted to the geological conditions of the project by Herrenknecht engineers, enabling the machine to manage tunnelling in two different soil conditions. On the first 200 meters of the northern tunnel, the machine drove through loose rock (mixture of sandstone and shell-bearing limestone) using the closed earth pressure mode. During further tunnelling, the machine changed to the open mode to deal with mainly hard rock (Bunter sandstone). To change operation modes only the cutting wheel must be adapted. The belt conveyor and the screw conveyor remain installed on the machine in both modes.

For the Saverne project, a convertible EPB Shield from Herrenknecht, which also masters the open hard rock mode with belt conveyor discharge, was used for the first time. After breakthrough of the first tunnel, the machine was dismantled and the individual components were returned to the  Ernolsheim lès Saverne launch portal to drive the second tube. Charlotte was back to daylight with her final breakthrough as early as February 25, 2013.

With well under two hours traveling time from 2016 onwards, the TGV between Paris and Strasbourg will be an attractive and environmentally-friendly alternative to air traffic. The French railway companies will then have also reached a milestone in the European large-scale project, the expansion of the rail network for high speed services from Paris via Strasbourg and Stuttgart to Bratislava.