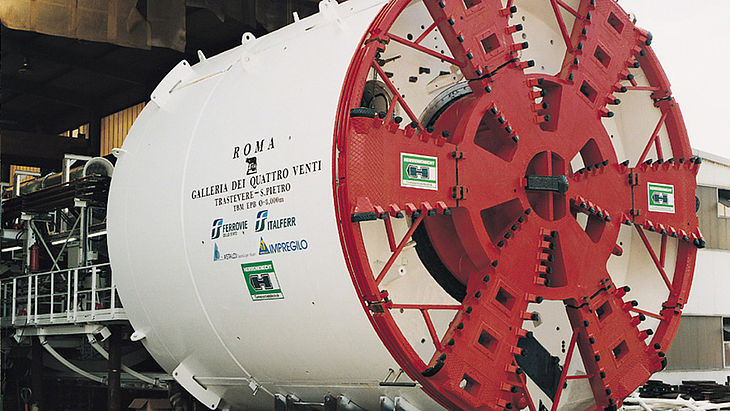 Part of the renovation and expansion program of the rail network involved the extension of the railway line between Rome and Viterbo. A key element in this project was the construction of a single-track tunnel between Roma Trastevere and Roma San Pietro stations. This tunnel represents an important improvement to Rome’s metro and rail infrastructures. It extends over a length of 2,199 meters from Roma Trastevere station, initially in an east-west direction and then in a south-north direction under the districts of Monteverde and Villa Abamalek, finally emerging into daylight at the Roma San Pietro station.

In addition to relieving the public transport network, the overall project was of immense importance in urban development, enabling reclamation of the districts of Trastevere – originally a railroad yard – Quattro Venti and San Pietro for the use of the city population. The project will involved construction of local amenity areas and parks with cycle paths, extending to the Gianicolenze ring road.

The tunnel was designed with an inside diameter of seven meters and was bored with the EPB Shield S-184 with overburden of between 16 and 45 meters. A particularly demanding aspect was tunnelling underneath the "Galleria Roma-Pisa". The new tunnel was bored only four meters below this existing rail tunnel without causing any settlement.

The launch shaft area was located in consistent tuff, which was present in around twelve percent of the route. This was followed by a section with lenticular levels of sandy clay (Monte Mario section), accounting for 21 percent of the overall route. A shorter area near the Quattro Venti station comprises course clayey sand, changing by the end of the route into medium-consistent gray clay (Monte Vaticano section). The successful breakthrough was made in late July 2002 after eleven months of tunnelling, with a best weekly advance of 110 meters.