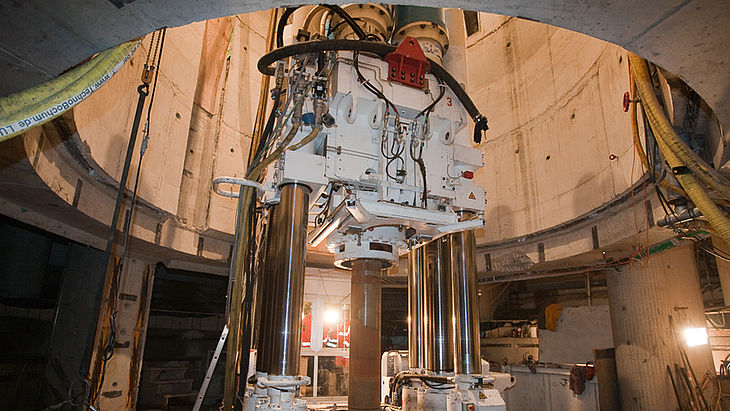 The Société Électrique de l’Our (SEO) in the Grand Duchy of Luxembourg expanded the "Vianden Pump Storage Plant" by an additional 11th machine set with a pump turbine, which would increase the capacity of the plant (turbine operation) by 200MW to a total of 1,300MW. The new 11th machine was planned to use the existing upper and lower reservoir system, but would have its own system of waterways.

This included a new vertical pressure shaft to be constructed with a diameter of 5.50 meters, which connects vertically under the new inlet and outlet tower. It reaches from the upper reservoir at around 300 meters altitude difference down to the level of the power house. After its completition, the pressure shaft would receive a steel plating (interal diameter 4.50 meters) designed to withstand the maximum possible water pressure.

The RBR550VF Raise Boring Rig developed by Herrenknecht was used for the vertical pressure shaft. The construction team assembled the compact rig within a confined space within the 45-meter-high inlet/outlet tower. During the entire phase of the project, the RBR600VF showed convincing reliability and mastered maximum rock strengths of up to 120MPa.

During drilling of the pilot hole, the rig reached an average performance of 23.3 meters/day as well as ten meters for reaming (max. 18 meters/day). The control system proved to be particularly reliable in the given geological conditions, which varied from solid rock to unconsolidated rock. Maximum permitted torques could therefore be relieved by the drive. This prevented blocking of the reamer or, in extreme cases, prevented sudden release of the connection between the reamer and the drilling rod. The schedule for assembly, pilot boring, reaming and disassembly was met after 40 drilling days and the pressure shaft was successfully constructed.