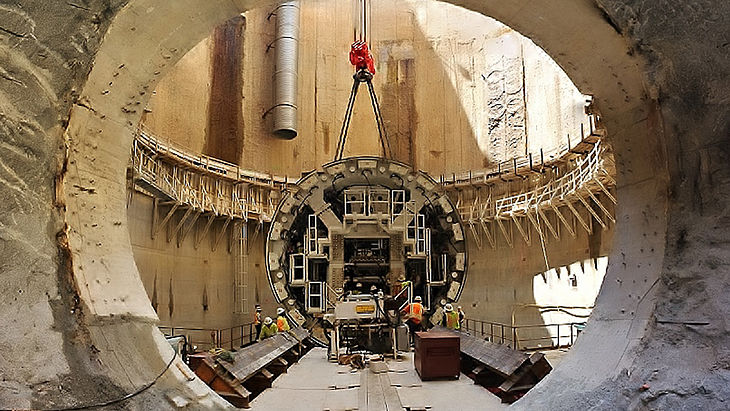 The "Clean Rivers Project" in Washington, D.C. will ensure that 96% less untreated sewage is discharged into the Potomac River, the Anacostia River and Rock Creek. To this end, three tunnel boring machines from Herrenknecht are creating huge tunnel structures with a total length of 20 kilometers, which will act both as temporary storage as well as efficient feeder lines to the Blue Plains Advanced Wastewater Treatment Plant in the south of the city, the world's largest wastewater treatment plant.

In large parts of the capital the sewer system in Washington, D.C. collects household and industrial sewage and stormwater in a single pipeline system. Created in the 19th century, the "Combined Sewer System" represented an advance over the then usual open ditches and cesspools. During the era of industrialization other large cities such as London and Berlin developed similar systems.

Today most of the systems cannot cope with the volume of sewage to be removed, not least due to the ever advancing sealing of surface areas. As a result, especially after heavy downpours, large volumes of sewage are discharged into rivers, lakes and oceans without first being diverted to wastewater treatment plants. In Washington, every year over 11 billion liters of sewage pollute the Anacostia and Potomac Rivers and Rock Creek through "Combined Sewer Overflows" (CSO).

The first of the three Herrenknecht machines, an Earth Pressure Balance Shield (EPB Shield) christened "Lady Bird" with a diameter of nearly 8 meters, began her advance in August 2013. 23 months and 7.25 kilometers of tunnelling later she reached her target on July 1, 2015. In the predominantly clayey ground and including crossing under the Anacostia River, the tunnelling crews of the joint venture carrying out the construction achieved top performances of up to 193.77 meters per week and 43.87 meters per day.

The number 2 in the Washington Herrenknecht trio, an EPB Shield with a diameter of 7.9 meters, began her 3.8 kilometer long underground mission in November 2015. In January 2015 U.S. Vice President Joe Biden used the machine, christened "Nanny", as a backdrop for a speech on the challenges ahead in U.S. infrastructure construction. His assessment of the Clean Rivers Project was spread across the country by the media: "Businesses do not come to places where the water is dirty." George Hawkins, General Manager at client D.C. Water, puts his finger clearly on the urgency of the project: without the additional capacity, in the very near future he would have difficulty ensuring large new residential or commercial projects were connected to the public sewer system. Precisely after one year of tunnelling and after crossing under the Anacostia River, a railway line, the Interstate 695 as well as a metro line, “Nannie” bored across the finish line on November 5, 2016.

From July to December 2015 finally, with the third Herrenknecht EPB Shield christened "Lucy" (diameter 6,950 mm), the contracting joint venture completed an 800 meter long tunnel section. In the short term, the "First Street Tunnel" has the task of preventing further flooding of the neighborhood after heavy downpours with additional temporary storage capacity underground.

With the largest section of the Clean River Project, the approximately eight-kilometer "Northeast Boundary Tunnel" (NEBT), the "First Street Tunnel" will be connected to the north end of the Anacostia River Tunnel and thus all tunnels are going to form a complete system until 2023. After a remanufacturing of "Nannie" in the Herrenknecht plant in Schwanau, the Herrenknecht EPB shield has been re-deployed since the summer of 2018 - now christened "Chris". On April 21, 2021, "Chris" successfully acomplished the breakthrough to the target shaft.