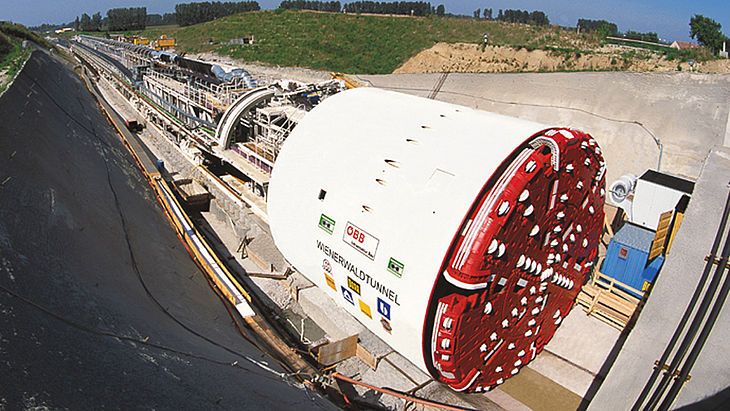 The Wienerwald Tunnel is today Austria's longst railway tunnel. The tunnel is the core section of the new Vienna-St. Pölten railway line with a total length of more than 13 kilometers. The west portal is located at Chorherrn in the Tullnerfeld region. Towards St. Pölten, the tunnel route is connected to the Perschling Tunnel Chain (Herrenknecht Single Shield TBM). This new railway line increases freight capacities and reduces travel times.

Almost eleven kilometers of the Winerwald Tunnel - the so called West Section ("Westabschnitt") - were produced by mechanized tunnelling by driving two parallel tunnels ("Track 7" and "Track 9") from the future western portal at Corherrn in the direction of Vienna. At overburdens of up to 260 meters, the tunnel route runs through flysch and molasse formations. The Wienerwald Tunnel was the first mechanized tunnelling project in Austria that was carried out outside conurbations.

Two Herrenknecht Single Shield TBMs each drove a single-track tunnel tube with an inner diameter of 9.65 meters. This TBM design is optimally suited for fast and safe tunnelling in challenging heterogeneous geological conditions. In September 2005, the cutting wheel of the Herrenknecht S-303 bored itself, for the first time, into the ground at the west portal. With outstanding tunnelling performances (weekly best: 254 meters, monthly best: 929 meters), the jobsite team and the S-303 reached the target after only 22 months of tunnelling as early as July 2007. During this time, a total of 4,771 segment rings were installed, each consisting of six elements (element length 2.25 meters, element weight each over 11 tonnes). The S-304 TBM achieved final breakthrough on August 16, 2007 after 10,754 meters of tunnelling.