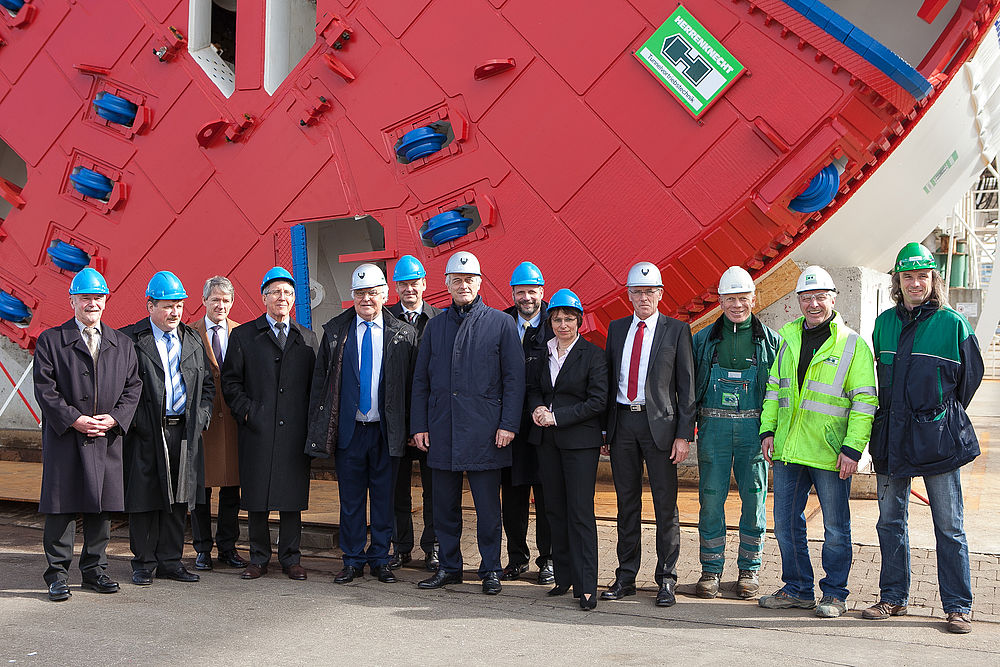 The German Federal Minister of Transport, Building and Urban Development, Dr. Peter Ramsauer, dropped in on Herrenknecht AG in Schwanau on March 5th 2013 during an official trip to southwest Germany. Founder and Chairman of the Board of Management Dr.-Ing. E. h. Martin Herrenknecht took this opportunity to show the Federal Minister of Transport a number of newly completed tunnel boring machines and reported on the infrastructure projects around the world that the company is involved in. "I have huge respect for family entrepreneurs like Martin Herrenknecht," said Dr. Ramsauer, who with his foreign trade initiative opens doors for German enterprises on trade missions abroad.

Schwanau, Germany, March 6, 2013. As a member of various trade delegations, entrepreneur Dr.-Ing. E. h. Martin Herrenknecht has accompanied Federal Minister of Transport Dr. Ramsauer on a number of overseas trips in the last few years. Most recently a trade mission for the reconstruction of infrastructure led to Iraq in February 2013. During his official visit in the southwest of Germany on March 5th 2013 the Federal Minister of Transport used the opportunity to take a closer look at the Herrenknecht operation. On arrival the Minister was greeted by several regional and local officials, including the District Administrator of the Ortenau district, Frank Scherer, the Mayor of the city of Offenburg, Edith Schreiner, the Mayor of Lahr, Dr. Wolfgang G. Müller, and the Mayor of Schwanau, Wolfgang Brucker.

Federal Minister Dr. Ramsauer was visibly impressed by the presentation of entrepreneur Martin Herrenknecht's global projects. "German companies are world leaders in infrastructure projects and are highly thought of around the globe. "It is therefore my goal to open doors for these firms abroad as well." He had "huge respect" for family entrepreneurs like Martin Herrenknecht, the minister said "As the global market leader in tunnel boring machines you are a model entrepreneur in Germany. For this reason I wanted to get an impression of your company on location," he added. The timing was good because Martin Herrenknecht was able to show the distinguished guest from Berlin a number of large tunnel boring machines standing ready at the factory for their projects in Germany, Italy, Russia and South America.