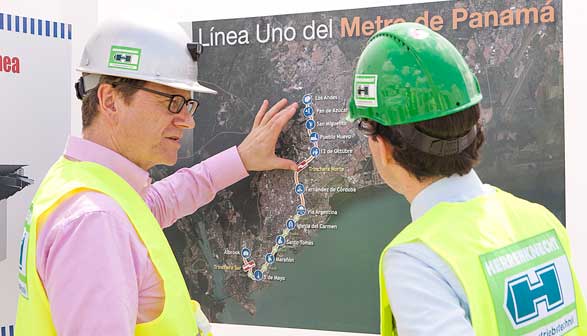 PDF Download
Share on
On Saturday, February 18, 2012, German Foreign Minister Guido Westerwelle saw for himself the construction of the first subway line in Panama City, for which two tunnel boring machines (TBMs) from Herrenknecht AG are being deployed.

Panama City, Panama/Schwanau, Germany, February 20, 2012. In the course of his trip to Latin America, on February 18, 2012 Federal Foreign Minister Dr. Guido Westerwelle, accompanied by the German ambassador to Panama, Michael Grau, visited the subway construction site in Panama City, where the first of two tunnel boring machines (TBMs) from Herrenknecht AG (EPB Shield S-680, Ø 9,730mm) has begun tunnelling. During a walk around the site and an inspection of the TBM in the tunnel, the Foreign Minister was briefed about the overall project and the machine technology.

Altogether the tunnelling specialists of the joint venture between Odebrecht S.A. (Brazil) and FCC Construccion S.A (Spain) will excavate a total of 6.4 km of tunnel with the two machines for the first subway line in Panama. In an official ceremony on January 23, 2012, Panama's president Ricardo Martinelli Berrocal had started tunnelling by the first machine - christened with the name of "Marta". From the launch shaft "Albrook", the first machine will tunnel in the direction of the future station "Iglesia del Carmen". Here it will meet the second machine (S-681), which will start further north at the station "12 de Octubre".

Supervision of the project on site is being handled by the Herrenknecht AG subsidiary in Panama City, established in 2011. From here it is also planned to support other projects in Latin America, for example sewage projects in Panama City and Colombia. In 2011, orders for TBMs, equipment and services worth around €120 million were received from Latin America. Outstanding references in this market include the world's largest sewage project "Túnel Emisor Oriente" in Mexico City (3 EPB shields for 30 km of tunnels) and the use of a large-diameter machine for construction of the metro in Sao Paulo, Brazil. In Rio de Janeiro, Brazil, a Herrenknecht machine is due to bore a tunnel for subway line 4 from 2013, and in Buenos Aires, Argentina, the construction of a 14 km long railway tunnel is planned.