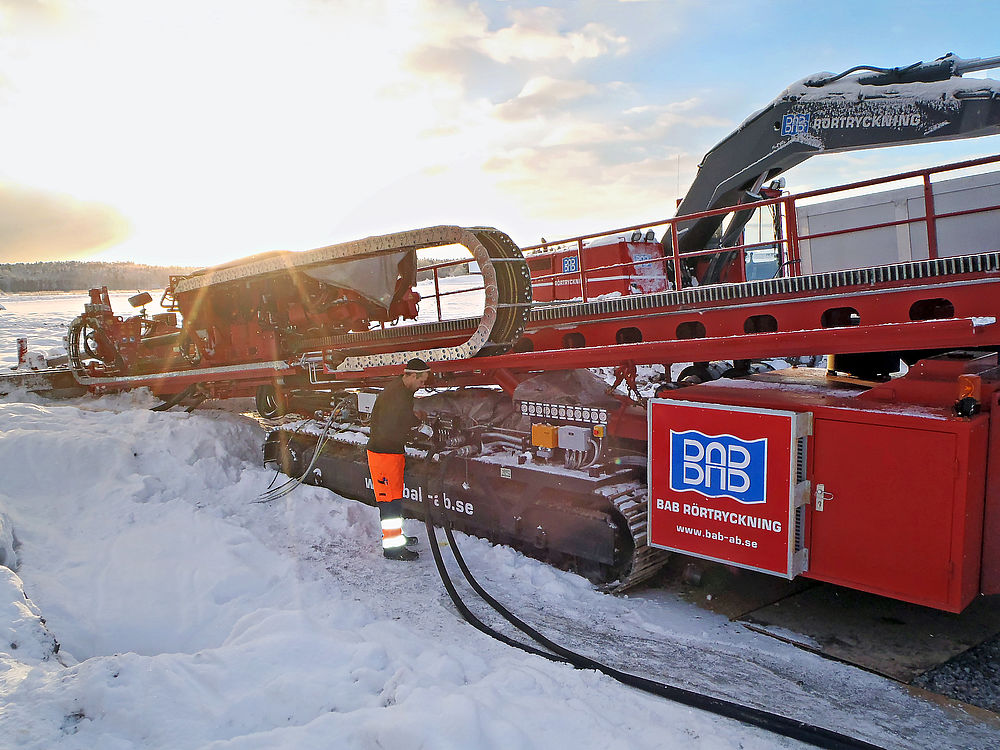 PDF Download
Share on
Top performances can be achieved with the trenchless installation method, even in icy temperatures well below the freezing point. A Swedish drilling team demonstrated this last winter. Using a horizontal drilling rig from Herrenknecht, the team installed three pipelines under a frozen lake within a very short period of time and as a pleasant side effect – set a Scandinavian long distance record.

Norrtälje, Sweden / Schwanau, Germany, March 17, 2014. Last winter, a team of the Swedish tunnelling company BAB Rörtryckning AB was struggling through centimeter-thick ice about 70 kilometers north of Stockholm. The mission was to install two sewage and drinking water pipelines under the Länna Kyrksjö lake. They are being used to supply the nearby community of Norrtälje whose pipeline system is also to be supplied in future with water from Mälaren lake to the west, because the town has grown so fast in recent years. The drilling tool used by BAB Rörtryckning was a Horizontal Directional Drilling Rig (HDD Rig) type HK150C made by Herrenknecht with a pulling force of 150 tonnes.

The first hole for the drinking water pipeline led from the shore to the bottom of the lake. There, the pipeline had to be connected to a conventionally laid pipeline, thus creating a link to the opposite shore. After only 2 days of drilling, the 700 meter long pilot was completed at the bottom of the lake. Then the weather changed dramatically. The temperature fell by more than 25 degrees and the general contractor SVEAB was suddenly faced with a frozen lake with a decimeter thick ice layer. "We fought against the ice for a total of two weeks, 24 hours a day. Day and night up to four boats were working on the lake as ice-breakers" recalls Magnus Tingstrand from BAB Rörtryckning AB. The boats had to break through the ice to be able to lift the pilot head, change it for a reamer and to connect the pipe which also was frozen into the ice. The effort was worth it – the 28-inch pipeline was installed safely in time for Christmas.

After a well-deserved Christmas break, BAB started installing the sewage ducts in January 2013. The plan was to install this in the form of a single "Double Pack" pipeline consisting of two Polyethylene tubes (2x355mm). This runs parallel to the previously created drinking water pipeline, which in turn, was to be produced in one step from shore to shore deep under the seabed. The weather was constantly icy. "We first had to clear the jobsite of ice and snow, which took us one full day with temperatures of 27 degrees Celsius below zero," said Magnus Tingstrand. Nevertheless, the drill team was able to achieve record-breaking performances with the HDD Rig. The pilot drill of the 1,385 meter long crossing under the lake was mastered with a record of 457 meters per day within an absolutely short period of time. No HDD project with a comparable length had ever been realized successfully before in Scandinavia. The pipeline installation itself took just under 48 hours.

A result which is pretty impressive. The core part of the new supply and disposal lines for the Norrtälje community was completed after only three months.