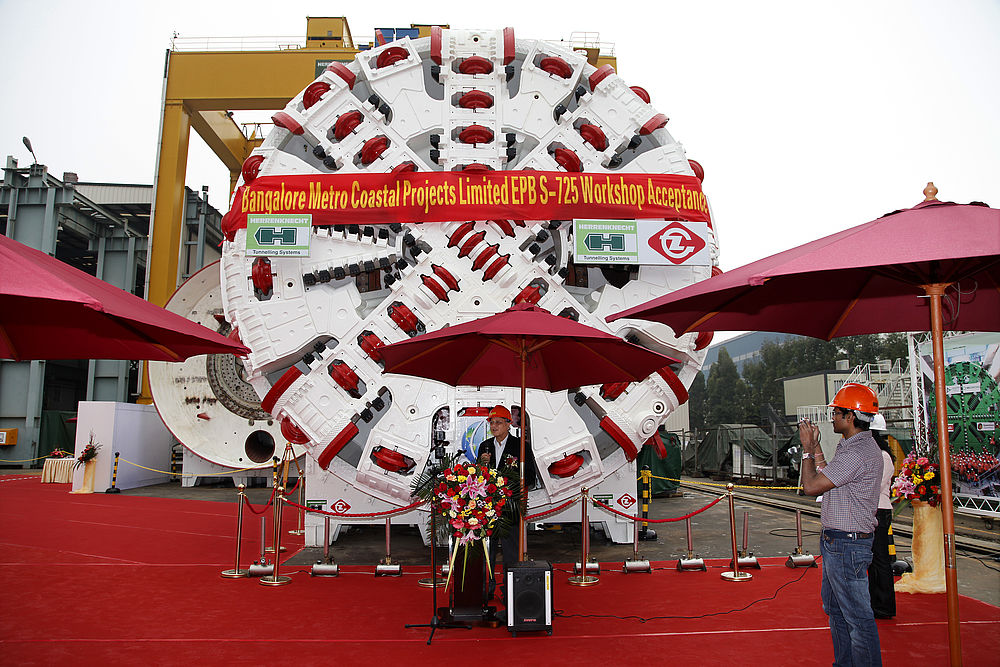 On the Indian subcontinent there is a great need to improve the infrastructure in the areas of transport and supply. In the rapidly growing large cities, Herrenknecht technology is heavily involved in the expansion of both the water supply and the metro systems. This year an Indian record of 525 meters of drilled and secured tunnel in one month was achieved in the Veligonda water project (state of Andhra Pradesh) with a Herrenknecht Double Shield TBM (diameter 7,900 mm).

Chennai, India / Schwanau, Germany, August 17, 2012. About a third of India's population - and rising - lives in large urban areas and more than 30 cities in India have more than a million inhabitants. At the same time, India is one of the world's largest economies. Today and in the future there is correspondingly high demand for metro systems, through which the high traffic volumes in the heavily built-up cities can be rerouted underground.

In recent months, Herrenknecht has received a total of 18 orders from India for tunnel boring machines in the large diameter range. Almost without exception these are for projects for the expansion of metro networks in the Indian cities of Delhi, Bangalore, Chennai and Kolkata. The EPB Shields (Ø 6,350 mm – 6,600 mm) are being used to create a total of 71 kilometers of tunnels for efficient mass transit systems. In March 2012 the Italian-Thai Development Public Co. Ltd began tunnelling with the first two of four Herrenknecht machines for the metro in Kolkata. In May and July already the first intermediate openings took place. In Delhi as well, in March and April two TBMs took up their work on behalf of Pratibha Industries Ltd. On July 26 one of the two TBMs completed its first intermediate breakthrough. In previous projects Indian tunnel builders have already successfully drilled about 30 km of metro tunnels in Delhi and New Delhi using Herrenknecht technology. In Chennai a total of eight TBMs are currently being prepared for the excavation of more than 38 kilometers of tunnels for new metro lines.

Record rates of advance in the Veligonda project

The distribution of clean drinking water is also a major issue in Indian infrastructure expansion. In some cases large distances need to be covered. In the east of the state of Andhra Pradesh (Southeast India) there is a major shortage of water due to low rainfall. It is planned to remedy this by piping water from the Srisailam Dam on the River Krishna over a distance of about 100 kilometers. Part of the construction project is the Veligonda tunnel with a length of 18 kilometers, which is being built by the Nuziveedu Swathi Coastal Consortium. Here a Double Shield TBM (Ø 7,900 mm) from Herrenknecht is in use. From October 2008 to June 2012 it completed over seven kilometers of the underground water pipeline. In February 2012 the best rates of advance ever known in Indian tunnel building were achieved: 525 meters of drilled and secured tunnel in 29 days. On the other side of the subcontinent, in the 13 million metropolis of Mumbai on the west coast, the existing water supply network is being elaborately renewed and expanded. A total of three hard rock specialists from Herrenknecht (Gripper TBMs, Ø 2,800 mm – 6,230 mm) drilled or are drilling over 16 kilometers of drinking water tunnels for the largest city in India.

To mark the 60th Anniversary of the establishment of diplomatic relations between Germany and India, a Year of Germany in India is currently taking place. During the "Urban Mela" series of events, Herrenknecht AG will present itself from August 24 to September 2 in Chennai. The event, sponsored by the German Foreign Office and other German organizations, deals with the effects and challenges of rapid urban growth. In this respect, Herrenknecht AG will exhibit its portfolio covering all aspects of mechanized tunnelling. On the basis of current joint projects, Herrenknecht will illustrate its many years of creative and innovative collaboration with its Indian partners.

Since 2007 Herrenknecht has been represented in India with its branch Herrenknecht India Pvt. Ltd in Chennai, in the state of Tamil Nadu. There around 90 employees support projects and customers quickly and competently. In December 2011 a new building on the branch premises expanded the company's storage, steel construction and assembly capacities – a total of 3,700 m2 – for the growing Indian market.