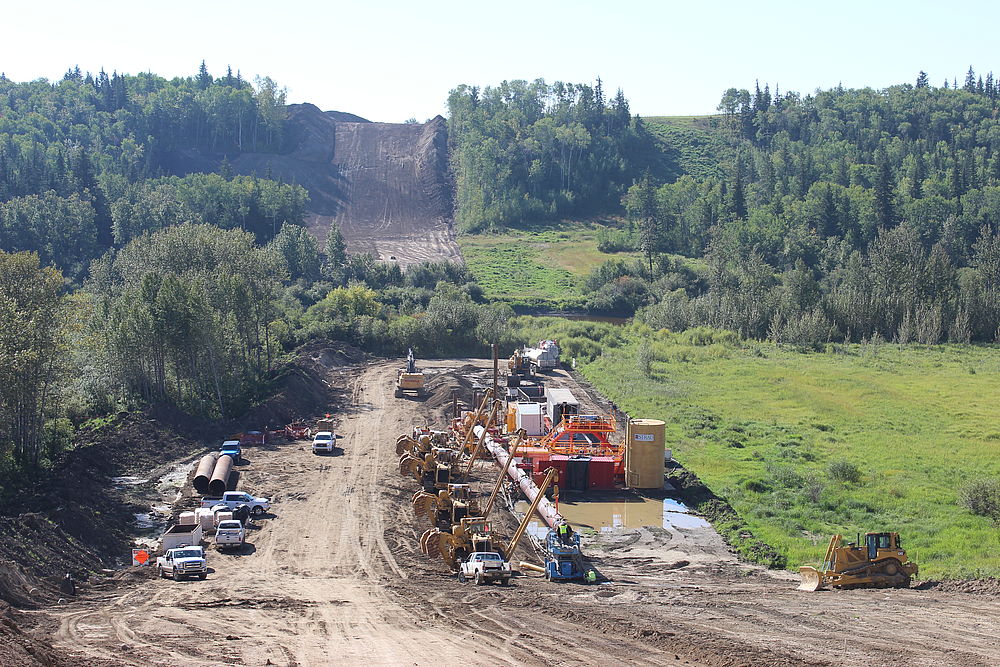 PDF Download
Share on
A smooth success right from the beginning: For the first time, a Canadian construction company has installed a pipeline using the Direct Pipe® technology from Herrenknecht. Crossing beneath the Beaver River in the province of Alberta with a 42 inch pipeline (1,067mm) was successfully completed in two weeks.

Bonnyville, Canada / Schwanau, Germany, December 9, 2013: Wes Lingerfelt got up to speed on the jobsite: "We were at the machine seven days a week to get the project finished quickly and efficiently." Wes Lingerfelt operated the Direct Pipe® system, which Canadian tunnelling company Michels Canada ordered from Herrenknecht for the Beaver River pipeline crossing in the province of Alberta. A pipeline with a diameter of 42 inches (1,067mm, double FBE coating) had to be built over a length of 340 meters under the river. The drill was carried out with an entry angle of four degrees and an exit angle of eight degrees with an overburden of around five meters below the river bed. The target pit was reached after 13 days of drilling between the start on August 24 and breakthrough on September 8, 2013. Wes Lingerfelt is impressed by the performance capacity of the technology: "We reached an impressive 68 meters on our best day."

Direct Pipe® was first used in Canada to cross beneath the Beaver River, a premiere achieved with bravura. Patrick O'Donoghue, Trenchless Crossing Manager at Michels Canada: "Direct Pipe is gaining more and more attention among trenchless tunnelling specialists in North America. We look forward to completing more high-quality projects."
The crossing beneath the Beaver River is part of a section of the "Cold Lake Pipeline" extension between La Corey and Hardisty over a total length of 240 kilometers. The client Inter Pipeline Limited is expanding its capacities for the transport of the bitumen gained from oil sands in Cold Lake.

The Direct Pipe® Technology developed by Herrenknecht combines the advantages of Microtunnelling and Horizontal Drilling Technology (HDD). In only one work step, a prefabricated pipeline is installed in the trenchless mode and the required borehole produced simultaneously. This provides for the speedy and highly cost-efficient installation of pipelines with lengths of up to more than 1,500 meters. To date, 35 projects have been completed successfully using Direct Pipe in Germany, Great Britain, Italy, Canada, the Netherlands, Thailand and the USA.