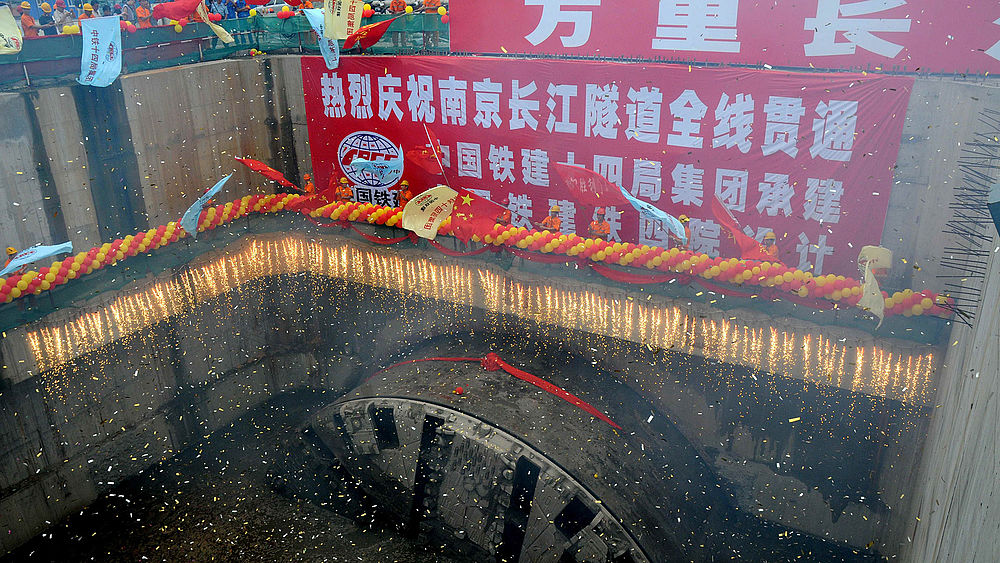 PDF Download
Share on
After the successful completion of the “Shanghai Changjiang Under River Tunnel Project”, two further Herrenknecht Mixshield giants, each with a diameter of 14.93m, crossed beneath the Yangtze River. They reached their target in Nanjing on May 20 and August 22, respectively, after their underground journey of almost 3km. The “Nanjing Yangtze River Tunnel” with its three traffic lanes in each direction will ease the traffic load in this big city.

Nanjing, China / Schwanau, Germany, August 22, 2009. Nanjing, the central city of the province of Jiangsu, is an important transportation hub on the axis leading inland from Shanghai. In order to channel the rapidly growing traffic load, a six-lane road tunnel, with three lanes in each direction, is being built beneath the River Yangtze. The two tubes of the “Nanjing Yangtze River Tunnel“ are 2,985 meters and 2,990 meters long, respectively. Herrenknecht received an order for two Mixshields with a diameter of 14.93 meters each. They are among the largest in the world. After the start of tunnelling in January 2008 (S-349 Mixshield) and May 2008 (S-350 Mixshield) respectively, these two machines tunnelled through very challenging terrain. Water pressures of up to 7.5 bar had to be supported with supreme reliability at the tunnel face. With an overburden of sometimes only 30 meters to the river bed, these giants made their way safely through highly water-bearing gravel and silt layers.

The Herrenknecht S-350 achieved breakthrough at the target shaft on the left-hand route on May 20, 2009, the S-349 reached its final tunnelling destination on August 22, 2009. The two companies managing the project, “Nanjing Changjiang Tunnel Project Co., Ltd.” and “China Railway 14th Bureau Group Co. Ltd.” can be proud of their achievement. The performances of up to 32m of completed tunnel per day constitute a top value for tunnelling machines of this scale. The best weekly performance was achieved at the end of July 2009 - 146 meters of newly produced tunnel. The Herrenknecht experts involved in the project can also be proud of what they achieved. Alois Eisendle, Herrenknecht AG’s top on-site representative on the Nanjing project, received a particular honor for his work. He was awarded the “May Honorary Labor Medal” by the Federation of Trade Unions of Jiangsu Province.

Chinese customers appreciate Herrenknecht as a supplier of tunnelling machines with large dimensions for particularly demanding missions. The world’s two largest Mixshields (S-317 and S-318, Ø 15.43m) successfully completed the excavation of two tunnels with a length of 7.47 kilometers in Shanghai last year. The tunnels will be opened to traffic before the end of this year, thus connecting the district of Pudong with the Changxing River Island in time for the Expo 2010. This project set new global standards in mechanized tunnel construction. Excavation of the two tunnels, each with three traffic lanes, was completed in only 20 months.