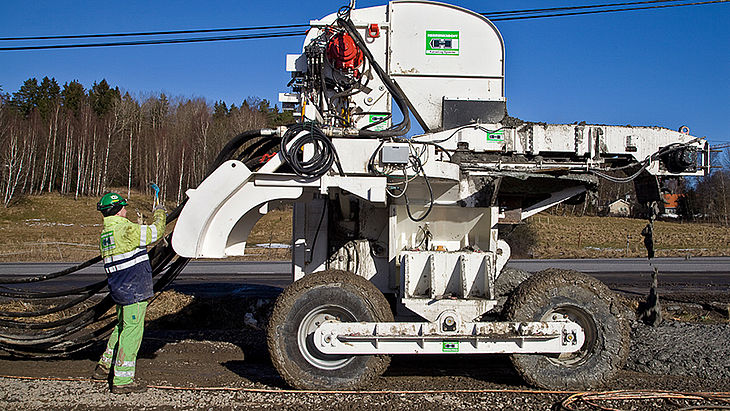 Stockholm’s water supplier Stockholm Vatten produces around 370,000m³ of drinking water daily for the 1.3 million residents of the Swedish capital. 10km south of Stockholm at Huddinge, a 1km-long water pipeline with a diameter of 48“ had to be added to the existing network. With a conventional „cut & cover“ approach and a groundwater level close to the surface the groundwater would have to be lowered. The newly developed Pipe Express® method from Herrenknecht, however, requires no lowering of the groundwater and was, therefore, chosen by client and construction company.

After drilling started on February 22, on March 5, 2015 already the destination had been reached. In the most productive 12-hour shift, 221 meters of pipeline disappeared into the ground; the average construction performance was 0.70 meters per minute. About 60 percent of the construction time was taken up just with welding and coating the up to 224 meter long steel pipe strings.

Pipe Express® from Herrenknecht is a new, semi-trenchless near-surface pipeline installation method. In this method, a buggy with a trenching unit creates a narrow, approximately 40 centimeter wide trench on the surface. Below it in the soil a boring machine is mounted that digs the actual tunnel with diameters of up to 1.50 meters and lays the pipeline at the same time. The excavated soil is brought to the surface by the trenching unit and backfilled in the trench again behind the machine, laborious finishing work is not required. The pushing force for both excavation unit and pipeline is provided by a Herrenknecht Pipe Thruster located at the starting position.

In contrast to the conventional construction method the corridors, including construction paths, are up to 70 percent narrower. Extensive earthworks, groundwater lowering, the ramming of sheet piles etc. are not necessary. Up to 2,000 meter long pipelines with a diameter of 900 – 1,500 millimeters (36" - 60") can thus be laid quickly and cost-efficiently.

Following the pilot project in the Netherlands and a subsequent deployment in Thailand, the new method showed ist strength at the Stockholm jobsite fort he third time already.

Video about the project (in German): https://www.youtube.com/watch?v=au64XS5tBUw