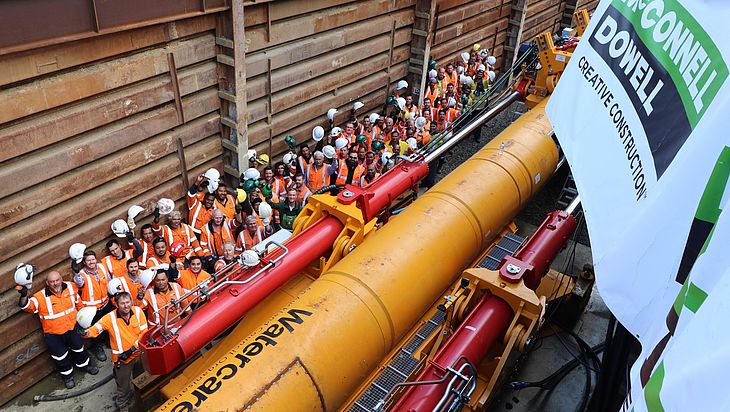 The Army Bay Wastewater Treatment Plant Outfall Replacement project, on the Hibiscus Coast near Auckland, is creating a new sea outfall with a total length of 2.9 kilometers. As a replacement for the existing obsolete pipe, the pipeline connects the pump station with the discharge point – about one kilometer off the coast – and increases the pipeline capacity of the wastewater treatment plant fourfold.

For this modernization measure, Herrenknecht’s innovative Direct Pipe® technology was used. With a drive of 1,930 meters, the crew set a distance world record with the Direct Pipe® method – the first time the method was used in New Zealand. The previous longest pipe string installed with Direct Pipe® was 1,496.48 meters long.

The tunnel alignment included a curve with a minimum radius of 1,262 meters. For guidance a Universal Navigation System (U.N.S.) with a north-seeking gyrocompass from the Herrenknecht subsidiary VMT was used. This system does not need a line of sight to the launch shaft to calculate the horizontal position of the machine. The vertical deviation of the TBM position from the designed tunnel alignment is calculated using an integrated hydrostatic water level system. This way the machine was navigated precisely and safely through the soft ground.

A special focus of the project was on environmental protection: neither the surrounding recreational and fishing area nor the local flora and fauna were to be affected. The Direct Pipe® method is ideal for such sensitive installations. Pipeline installation takes place in a single step. In this way, the environmental impact is kept low and the landscape remains largely intact. In Herrenknecht's patented method, an AVN machine excavates a tunnel while the pipe string attached to the TBM is simultaneously inserted during the tunnelling process. The required thrust force is provided by the Pipe Thruster, two of which were used in New Zealand.

Just under four months after launch, the successful breakthrough of the microtunnelling machine "Blanche" was reported in New Zealand’s Whangaparaoa. After reaching the target location on the seabed, the AVN machine was recovered from the sea and towed back to land. The pipeline section installed underground by the Herrenknecht machine runs from the treatment plant to the coast and about half a kilometer out to sea. At the final tunnelling destination a pipe string almost 500 meters in length was connected, which leads further out to sea. Commissioning is planned for early 2019.