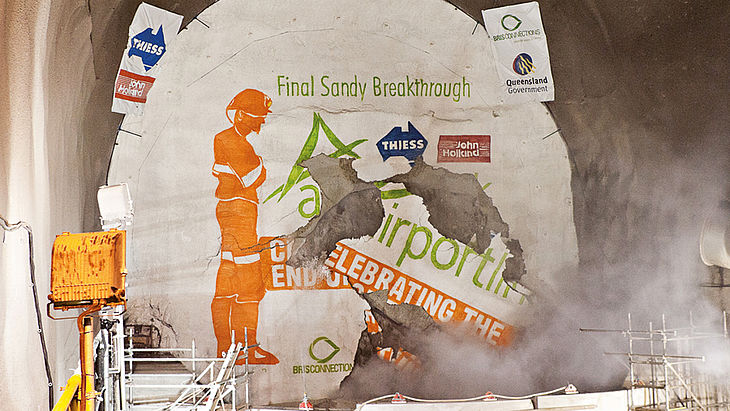 Brisbane Airport Link East-West Tunnel
Australia, Brisbane
The largest in Down Under

The third project is the "Airport Link East-West Tunnel". As an extension of the Clem Jones Tunnel it should shorten the drive between the city and airport. The S-512 ("Sandy") and S-514 ("Rocksy") Earth Pressure Balance Shields for the Airport Link, each with a diameter of 12.45 meters, are the largest machines to have tunnelled in Australia to date. Both shields are excavating a road tunnel of almost 2.5 kilometers in length. The two machines started tunnelling in July and August 2010 respectively.

Apart from the two XXL machines, the offer package also included products from H+E Logistik (belt conveyor for muck transport), Herrenknecht Formwork (segment moulds) and VMT (measurements and navigation). After just twelve months, Rocksy reached her target on July 4, 2011, her sister Sandy achieving the same just two days later on July 6. The new tunnel will revolutionize traffic in northern Brisbane, announced Queensland's Premier Anna Bligh on the breakthrough in July. She thanked the site teams for keeping to schedule and budgets. One year later, in July 2012, the tunnel was put into operation.