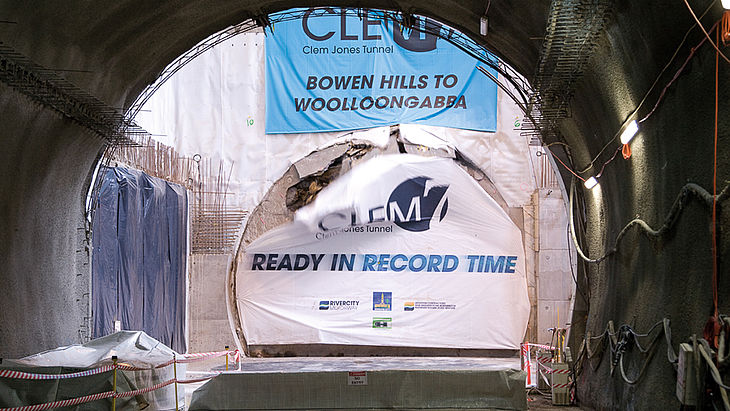 Brisbane, the capital of Queensland in north-eastern Australia, is one of the boom regions in "Down Under". The metropol region's populatation grew, for example, by more than ten percent in 2011. Politics and adminstration are faced with the task to implement efficient means of transportation.

The later Prime Minister of Queensland, Campbell Newman, initiated during his term as Brisbane's mayor the traffic plan "TransApex" with the goal to improve the traffic situation sustainable. Its backbone is a mainly underground highway network that is supposed to reduce aboveground through traffic and to provide a fast connection to the airport.

Two sections of this mjor project have already been successfully completed by Herrenknecht machines. The twin-tube tunnel for the "Airport Link" have been excavated by two EPB Shields (Ø 12.45 meters) and the "Clem Jones Tunnel" (formerly North-South Bypass Tunnel) under the Brisbane River were driven by two Double Shield TBMs (Ø 12,34 meters). At the "Northern Link" project the two Double Shield TBMs are re-used.

The first of the two Clem Jones giants - the largest Double Shields ever produced by Herrenknecht - were presented right on schedule for workshop acceptance in Schwanau in May 2007, followed by the workshop aceptance of the second machine in August 2007. As early as January and March 2008, tunnelling started at Bowen Hills. "Florence" (S-376) crossed the finish line in Woolloongabba on April 16, 2009. One month later, on May 26, 2009, "Mathilda" (S-375) drove into the target shaft.

Together with the huge tunnel boring machines, Herrenknecht delivered  the mould system by Herrenknecht Formwork GmbH for the segment production and the belt conveyors by H+E Logistik.