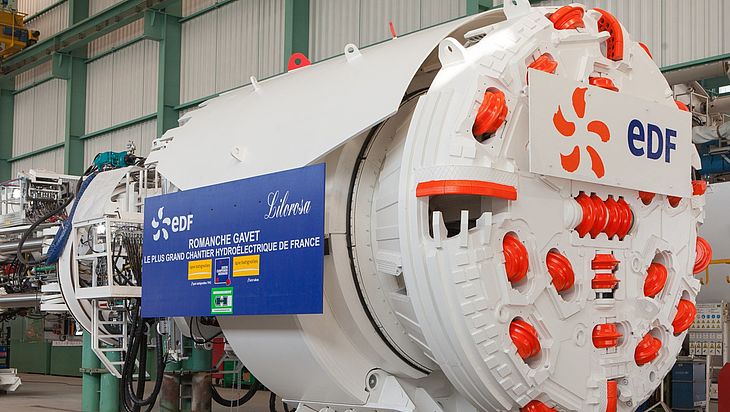 For the construction of a headrace tunnel for the French hydropower project Chute de Gavet, two Herrenknecht Gripper tunnel boring machines (TBMs) excavated a 9,358 meter long tunnel. The headrace tunnel leads from the dam in Livet to the underground power plant in Gavet and has a flow volume of 41 m³/s. On completion, the new plant in the Romanche Valley will replace six old hydropower plants. With a capacity of 560 million kWh/year, the new power plant is expected to increase electricity production by 30%.

The two Gripper TBMs "ROSALI" and "LILOROSA" began their drives a few weeks apart from an intermediate adit in Ponant, which was excavated from the rock by conventional means. ROSALI drove the 3,408 m section downstream in the direction of Gavet, LILOROSA the 5,705 m long tunnel upstream to Livet. The first, shorter tunnel section was successfully completed at Gavet in February 2017. The final breakthrough was celebrated in January 2018.

For the advance in the abrasive hard rock of the French Alps the machines were equipped with 19 inch disc cutters with a high load capacity of 315 kN, a closed cutterhead and various additional equipment for rock stabilization, such as a steel mat placement device and shotcrete robots. Before each stroke, the Gripper machines with an excavation diameter of 4.74 meters were braced against the previously excavated tunnel wall using laterally extendable hydraulic cylinders and the gripper shoes. Thrust cylinders were then supported by the braced gripper unit and pushed the rotating cutterhead against the tunnel face. Due to the rolling movement of the cutterhead, individual pieces broke out of the rock and were transported out of the tunnel via belt conveyors. In total, more than 170,000 m³ of rock were removed for the Chute de Gavet project.