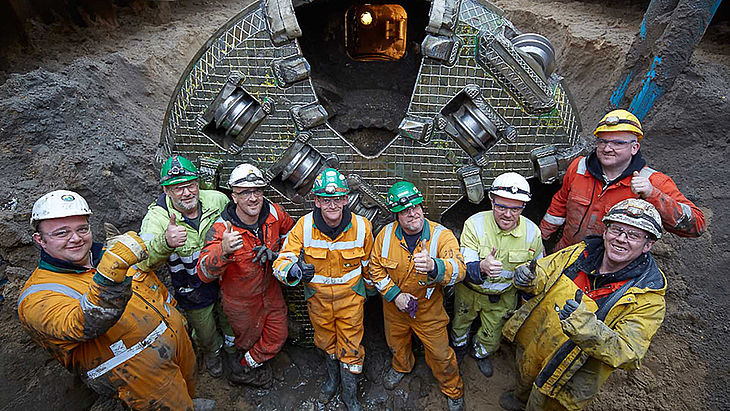 In northern Germany, the existing pipeline network is being modernized for regional gas supply. This major project also includes the "Elbedüker Hetlingen" where a Herrenknecht AVND machine crossed under the Elbe near Hamburg in the second half of 2014. The diversified ground ranged from sandy gravel soil with stones through layers of boulder clay featuring larger rocks to layers of clay which tend to be very sticky. This was exacerbated by high water pressures of up to 4 bar as well as a route length of more than 1.5 kilometers. The project is thus one of the longest pipe-jacking jobs in the world.

Right from the start the drilling company relied on the expertise and support offered by Herrenknecht. Even during refurbishment and project-specific modification of the used AVND2400AB, collaboration was hand in hand. This included a videoscope examination of the main bearing as well as adaptation of the man lock and the main bearing sealing for water pressures of up to 4 bar.

Further collaboration on the jobsite then proceeded particularly positively. Two Herrenknecht machine operators provided support during the tunnelling process, enabling efficient three-shift operations around the clock. At all times, experienced service technicians from Herrenknecht were also on hand to provide tunnelling support.

For the purpose of increasing safety, the contractor ordered an entire range of navigation, survey and monitoring technology from Herrenknecht subsidiary VMT. Using IRIS.microtunnel – a web-based data management and monitoring system – among other things it is possible to permanently monitor all support pressures while comparing them in parallel with the fluctuating tides of the Elbe. Furthermore, the comprehensive HADES communication system featuring several modules such as video surveillance, fire alarm or RFID jobsite access control was used for the first time in Germany.

Almost 200 meters into the route the machine encountered large boulders. Such geological conditions had been anticipated, however. Thanks to their experience and thorough preparations, the jobsite team swiftly overcame these obstacles. Following the replacement of exceedingly worn excavation tools, the AVND2400 picked up speed along the remaining route. Top values of up to 40 meters per day were the result. The entire tunnelling length could be handled directly by the main jacking station in the launch shaft without using any intermediate jacking stations.

On December 4, 2012 after only 112 tunnelling days in total, the tunnelling crew proudly celebrated the breakthrough – punctually on the feast day of Saint Barbara, the patron saint of tunnel builders and miners.