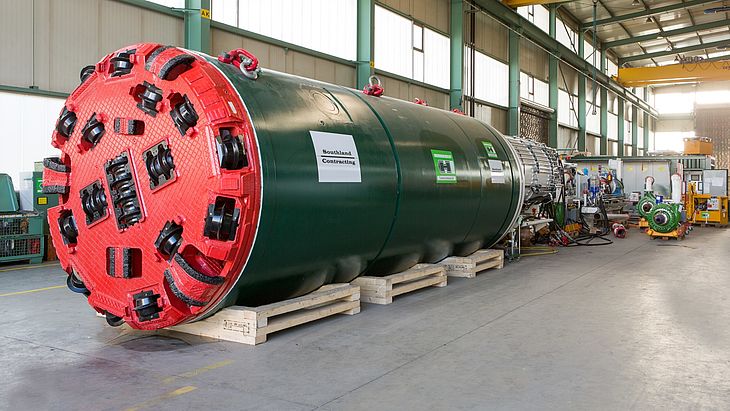 The 9 million inhabitants of New York City are supplied with drinking water from the mountains north and west of the city via a widely branched tunnel and pipeline system, the Catskill System. About 15 percent of the water comes from the Schoharie Reservoir, which is dammed up by the Gilboa Dam. The dam has been in use for over 80 years and needs to be restored and adapted to current New York City Department of Environmental Protection (NYCDEP) safety standards.

An important part of the repair of the dam, which went into operation in 1927, is the construction of an outlet tunnel. Through this, water is to be released in a controlled manner, e.g. when the water level reaches a critical level due to heavy rainfall. For this tunnel, consisting of two drive sections, Herrenknecht has supplied an AVN2200AB: from a 53 meter deep shaft, a 283 meter long tunnel leads out into the reservoir, where the machine is salvaged underwater using a recovery module. A second 362 meter long tunnel leads from the same shaft downstream.

The machine is equipped with a reinforced sealing system to withstand the expected water pressure of up to 5 bar. The geology challenges the material of the cutterhead and cutting tools with rock strengths of up to 250 MPa. The project-specific machine adaptation therefore also includes a man lock for the safe performance of maintenance work and tool changes.

In early 2019, tunnelling work for the Gilboa Dam have benn successfully completed. The Herrenknecht Microtunnelling Machine dug its way through the underground at a rate of up to 12.1 meters per day. With the completion of the outlet tunnel, the water level of the Gilboa Dam can be safely controlled in the future.