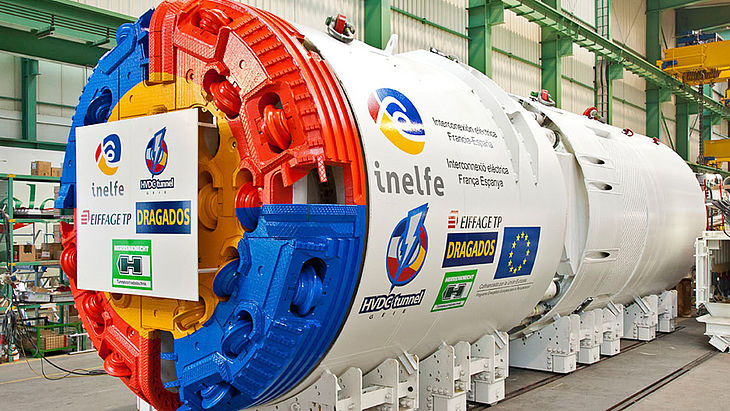 The cross-border power lines that connect Spain with France and the rest of Europe need to be upgraded urgently. The four existing connections do not have sufficient capacities to cope with bottlenecks or to compensate for fluctuations resulting from the use of renewable energy sources. As part of the bi-national project „INELFE“ (INterconexión ELéctrica Francia-España) a 64.5-kilometer-long, ultra-modern high-voltage direct current transmission link (HVDC) is being installed from Baixas, near Perpignan in France to Santa Llogaia near Figueras in Spain.

At a length of 8.2 kilometers, the route passes under the Pyrenees on the Catalan Mediterranean coast in a tunnel excavated by two Herrenknecht Double Shield TBMs. „Canigou“ and „Alberas“ are compact powerhouses: Equipped with an installed power of 1,250kW, they have a torque of 2,000kNm with a cutterhead diameter of 4.3 meters. The tunnel boring machines have a length of 301 and 253 meters respectively and weigh 620 tonnes. The Double Shield TBMs started at their launch portals in March and October 2012. „Alberas“ begun its mission in La Jonquera in Spain. „Canigou“ advanced towards its sister machine from Montesquieu-des-Albères in France. The two Double Shield powerhouses lined up to create an ambitious tunnel project within a demanding time frame.

After 1.23 kilometers of tunnelling, „Canigou“ reached the end of the lot, coming from France beneath the Massif des Albères, in March 2013. The „Canigou“ machine was immediately dismantled in the protection of a tunnel section in stable rock without segmental lining under the supervision of Herrenknecht specialists. Already on April 22, 2013 and after 7 kilometers of tunnelling, „Alberas“ coming from Spain drove into the tunnel excavated by „Canigou“, and the breakthrough was celebrated in superb style. The best tunnelling performance of the overall project was achieved by the jobsite teams with "Alberas" on the Spanish side: 53.5 meters per day with up to 1,040 meters of excavted and lined tunnel per month.

For the „INELFE“ project Herrenknecht prepared the back-up systems of the two machines for double storage: Logistics and storage facilities were designed in such a way that segments and grout could always be stored on the machine for two ring building sequences. Thus, the machine operators were able to exploit the potential of the Double Shield principle, without being limited by possible shortages in the material logistics. Due to the design of the machine components it was possible to dismantle them within the excavation diameter without having to break out an additional cavern. By this, „Alberas“ could also be dismantled in the excavated tunnel, and the components were removed through the north portal.