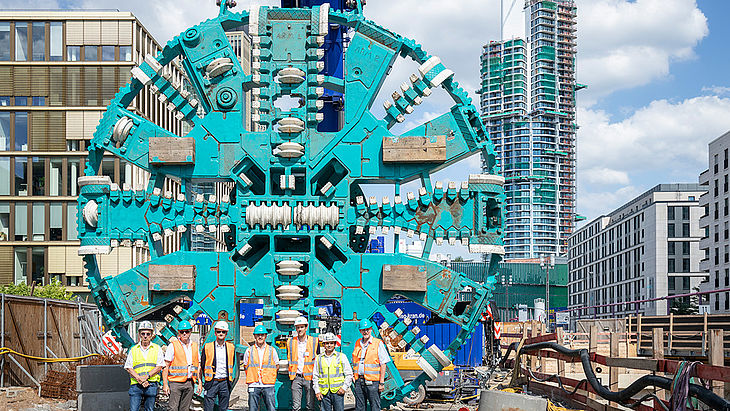 The Europaviertel is a new district being developed on the former site of Frankfurt's main freight yard, where about 30,000 people will work and 10,000 will live. The extended U5 light rail line with a total of four stations – one underground and three above ground – connects the growing district to the city's public transport network. The deepest point of the tunnels lies 17 meters below the surface. One of the largest and most important infrastructure projects in Frankfurt, from late 2025 the expansion of the U5 will offer people efficient and environmentally friendly mobility with a modern means of public transport.

Frankfurt’s Lord Mayor Peter Feldmann says: "We made a landmark decision in 2012 when we decided to connect the Europaviertel to the public transport network with an efficient subway. With the extended U5, the people who live and work here, or will do so in the future, will find a modern, fast, public transport system, as they are entitled to expect from a city like Frankfurt."

The U5 line will be extended about 2.7 kilometer to the west, past the former terminus "Hauptbahnhof" to the new Europaviertel quarter. The client, Verkehrsgesellschaft Frankfurt am Main (VGF), set up the Stadtbahn Europaviertel Projektbaugesellschaft GmbH (SBEV) in cooperation with the city of Frankfurt specifically for the "Extension of the light rail line U5 Europaviertel” project.

Construction of the underground part of the line and the shell of the "Güterplatz" station located in this section is being carried out by the joint venture U5 Europaviertel, a consortium consisting of the two companies PORR Germany GmbH and the PORR subsidiary Stump-Franki Spezialtiefbau GmbH.

With Eva into the Europaviertel
One after the other, the two almost parallel tunnel tubes, 837 and 860 meters long, have been bored and lined with concrete segments by a Herrenknecht Earth Pressure Balance Shield (EPB Shield) with an excavation diameter of 7.15 meters. The tunnel boring machine S-1127 was christened "Eva" during the official launching ceremony. The name was chosen in a competition and stands for the German acronym for "connecting Europaviertel".

Under the inner city without settlement
“Eva" is specially adapted to the circumstances of the project. The Frankfurt underground consists mainly of cohesive soils with a high clay and silt content and low water permeability. A particular challenge is tunnelling under the densely built up inner city, where heave or settlement must be safely avoided.

The cutting wheel of the EPB Shield, which is equipped with around 100 scrapers and 29 disc cutters as tools to excavate the soil, is pressed against the tunnel face as it moves forward and loosens the soil ahead. The excavated material, the soil paste, is used directly as a support medium. This allows the necessary pressure balance at the tunnel face and thus prevents an uncontrolled collapse of the soil. As a result, the risk of settlement or heave on the surface is minimized and consequent damage to structures prevented.

After the end of excavation of the southern tunnel, the machine was disassembled and pulled back through the previously built tunnel to its starting point. After reassembly, in late January 2021 the machine set off again to bore the second, northern tunnel tube as well. In late May 2021 already, it arrived at its destination under the Platz der Republik square.

During excavation, eight miners per shift worked seven days a week and 24 hours a day on the machine at depths of up to 25 meters in the Frankfurt underground. In total the team consists of 60 miners. For the 1,697 meter long tunnel they installed 8,358 concrete lining segments.