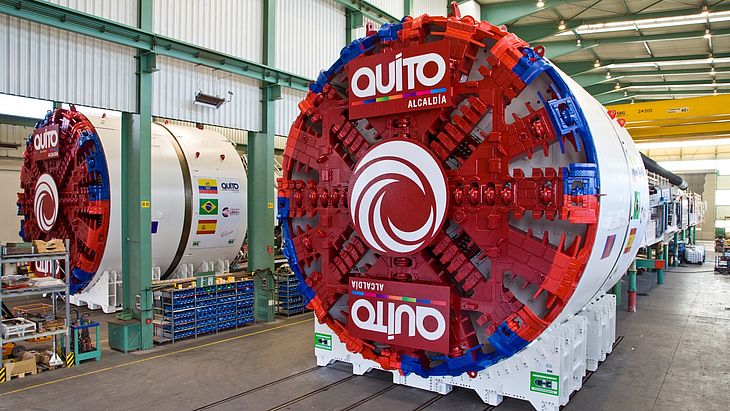 Quito is the highest capital in the world. Its foundation dates back to the early 16th century. In the 20th century in particular, the city grew rapidly. The resulting heavy traffic regularly causes traffic jams and smog. High time to install a metro for the city’s 2.2 million inhabitants. The new rail system is an important step in the modernization of the metropolis and will transport over 400,000 passengers daily. The switch to this more environmentally friendly means of mass transport is expected to save up to 30,000 tonnes of CO2 emissions per year.

The tunnel alignment of metro line 1 runs at a depth of about 20 to 25 meters below Quito. Three Herrenknecht EPB Shields excavated approximately 20 kilometers of the 22 kilometer long line through the Ecuadorian Andes. After completion, 15 stations connect the south and north of the capital with each other in a journey time of only 34 minutes.

On March 3, 2017, the first EPB Shield, named "La Guaragua", began its underground mission. The machine excavated 6,864 meters before its final breakthrough on August 25, 2018. The well-rehearsed TBM crew achieved weekly best performances of over 373 meters and daily best performances of 60 meters. The tunnel boring machine "Luz de América" even surpassed these figures: the EPB Shield excavated nearly 80 meters per day and 1,489.5 meters within 30 days. With this achievement, "Luz de América" broke an advance rate record set by the machine "La Guaragua" just a few weeks earlier: 1,131 meters in 30 days. "Luz de América" completed its drive on October 1, 2018, after more than 16 months of tunnelling. With its final breakthrough, all underground tunnelling work for Quito's first metro line was successfully completed.