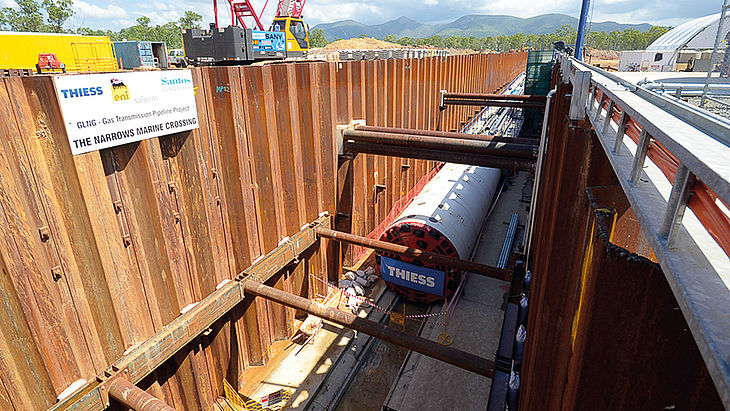 Australia is preparing for the future: with the Santos GLNG Gas Transmission Project, a 420 kilometer long gas pipeline was built that connects the gas fields at Roma and Fairfield with the gas liquefaction plant on Curtis Island. To connect the island to the mainland the Narrows had to be crossed, an almost 2 kilometer wide estuary off the coast of the Australian state of Queensland. For this purpose a protection tunnel was built, in which the pipeline could then be installed.

For the crossing under "The Narrows", special emphasis was placed on environmental protection. Under no circumstances were the marine life and the sensitive mangroves on the shores to be disturbed. The tunnelling contractor relied on trenchless tunnelling technology from Herrenknecht to drive the 4.3 kilometer protection tunnel. The EPB Shield used had already successfully handled an earlier deployment in Australia and was completely refurbished by the local Herrenknecht subsidiary for the Gladstone project. The machine with a diameter of 4 meters, a weight of 277 tonnes and a length of 100 meters was also equipped with a slurryfier box. This meant the excavated material could be removed hydraulically if necessary, for example, in loose soils with high groundwater content.

In April 2013 the 4,300 meter long drive began. On average, 125 meters per week were covered – 30 meters more than provided for in the project plan. After less than a year the EPB Shield "Rose-Ella" reached the target shaft on Curtis Island in February 2014. Thanks to the latest tunnelling technology from Herrenknecht, the marine environment was not affected.

For the subsequent installation of the pipeline with an outer diameter of 1.2 meters the tunnel was flooded so the neutrally buoyant pipe string could be floated into position without additional measures using an HK750PT Pipe Thruster. Up to 480 meters of pipeline per day were pushed into the previously bored and segmentally lined protection tunnel. For 5 meters of pipe insertion the Pipe Thruster requires 6 minutes, so the entire process was completed in just 14 days. 55,000 cubic meters of earth were removed during the entire advance, 21,750 concrete segments were installed and over 420,000 man hours invested in the realization of the Narrows Crossing.