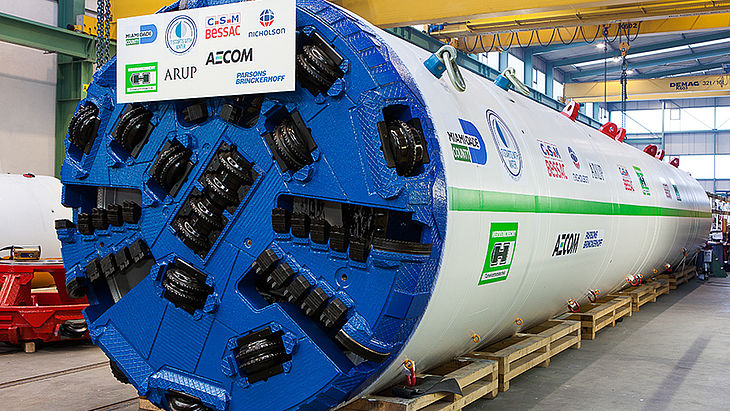 Almost all sewage from a small group of islands in the port of Miami is collected in a single discharge pipeline and sent to the treatment plant on Virginia Key for further treatment and disposal. A crucially important process for life above ground, for almost 90,000 people live in Miami Beach alone. The bottleneck, the existing 54" pipeline leading from Fisher Island to Virginia Key, however, was in a dilapidated state. To prevent a failure, the link had to be replaced as soon as possible. The difficult ground conditions – highly permeable limestone with sand-filled cavities – required a precise and well-planned approach.

To be prepared for all eventualities, for example, the expected fissured ground conditions, the customer chose a Herrenknecht HCS Machine (Herrenknecht Combined Shield). The special feature: depending on requirements, the system can work both as an AVN Machine in slurry mode as well as in EPB mode. In April 2015 "Dorsey", named after D. A. Dorsey, the first black millionaire from Miami and former owner of Fisher Island, began the 1,610 meter long journey. The alignment led from the treatment plant on Virginia Key under the Norris Cut through to Fisher Island.

Space at the launch shaft was extremely cramped. For the first 80 meters the machine was therefore pushed into the ground with a jacking frame in pipe jacking mode using an adapter developed by the customer. Once the required length of the tunnel was reached, the complete TBM back-ups were pushed into the tunnel in a single step. The planned advance with the segmental lining method then continued. At a depth of 18 to 21 meters below sea level, over the next ten months the machine dug its way forward entirely in AVN mode. The geology was less fissured than originally anticipated – EPB mode was therefore not required. The additionally installed bulkhead with a dive pit between machine pipes 1 and 2 did not need to be used either. In fissured geology in the case of loss of pressure and simultaneous water ingress the new development would have allowed safe access for divers to the front area of the machine – in positive pressure and under water.

In order to facilitate the future sewage flow, the alignment followed a slight slope of 0.2 percent. In February 2016 the machine arrived safely and precisely at the target shaft on Fisher Island. Daily top performances of 24 meters confirmed the customer in his choice of the combined machine technology. The 60" pipeline required for future use was then installed.