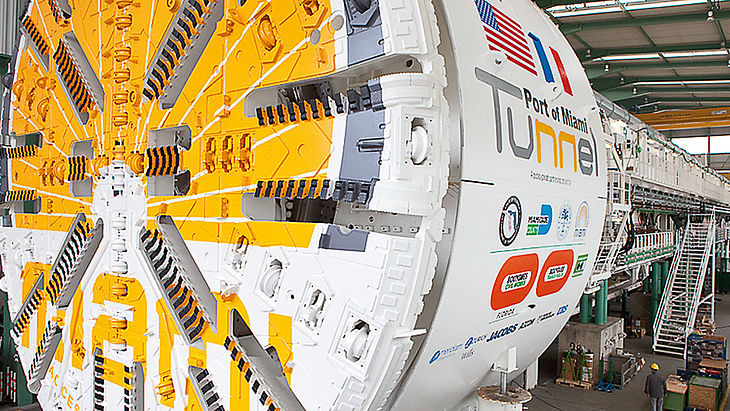 The original plan was to use a "normal" EPB Shield. However, in-depth investigations of the ground conditions in the Port of Miami, Florida showed that extremely porous material (Key Largo Limestone), which is also subject to high water pressure, had to be expected along around one third of the tunnel route. An EBP Shield would meet its limits here. Together with the customer's specialists, Herrenknecht engineers put a lot of energy into finding a solution.

The mission is to excavate the Port of Miami Tunnel, a twin-bore road tunnel with two lanes in each direction, which is to relieve Miami's city center of 16,000 vehicles heading for the port daily. The Port of Miami, with its more than four million passengers a year, is not only the largest cruise ship port in the world but also an important freight terminal processing around seven million tonnes of goods annually. The Port of Miami Tunnel will cross beneath the fairway of cruise ships and connect the port with Watson Island. There, an existing bridge will be extended creating efficient access to the I-395 and I-95 highways.

Herrenknecht delivered an EPB Shield with a diameter of 12.86 meters for Miami, the largest machine of this type used in the USA at that time. Final workshop acceptance took place in spring 2011 in Schwanau, tunnelling in Miami started in November 2011. After only eight months, the 1,278 meters of the first of the two tunnels (Eastbound Tunnel) were completed on July 31, 2012. Several hundred spectators enthusiastically celebrated Harriet's breakthrough. Top performances stood at 18.7 meters a day and 100.3 meters a week. Following breakthrough the machine, including its back-up systems, is being used to excavate the second tube (Westbound Tunnel) going in the opposite direction. The breakthrough after the second tunnel is reached as soon as May 6, 2013. The construction company's project manager places the the project in the top flight of tunnel construction on the occasion of the breakthrough celebration: one of the technically most challenging projects worldwide is completed successfully. For the second tunnel, a best daily performance of 15.3 meters and a best weekly performance of 86.7 meters is recorded in the jobsite reports.

The specially developed solution for Miami was to extend the application range of the EPB Shield. The aim was to safely control both the soft but stable grounds at the tunnel entrance and exit as well as the porous limestone subject to water pressures of up to three bar beneath the middle of the fairway. Engineers describe this system as Water Control Process (WCP). It was designed to control the high water pressure and, at the same time, regulates the discharge of the excavated material. The water and soil mixture is conveyed via a slurry circuit using a screw conveyor with connected stone crusher and slurryfier box. The system is supported by injections to stabilize the ground conditions in front of the machine.

In 2012, the internationally renowned auditing and advisory firm KPMG put the Port of Miami Tunnel on the list of the ten most innovative traffic projects in the world, together with the East Side Access Project (New York, 2x Mixshields), the Bosporus Road Tunnel (Istanbul, 1x Mixshield) and the Sao Paulo metro line 4 (1x EPB Shield).