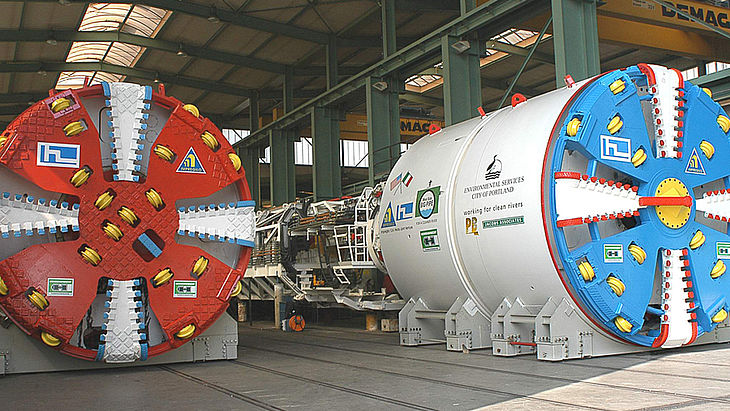 The American Environmental Protection Agency (EPA) is strict. In the future, the overflow of untreated water into rivers and streams during periods of heavy precipitation must be prevented. Portland, Oregon, set up the project "The Big Pipe". Stormwater and sewage would be stored underground in huge tunnels in times when the sewage plants' capacities are not sufficient to handle the water. Afterwards, the water would be pumped to the sewage plants where it would get treated. By this, the Willamette River would spared from getting poluted. The altogether 5.7-kilometerlong “West Side Tunnel” would collect all of the water from the western part of the city, while the “East Side Tunnel” would do the same for the eastern side of Portland.

In March 2006, for the two Herrenknecht Mixshields S-231 and S-232 the starting signal was given for the excavation of the "West Side Tunnels". The tunnel route crosses under the Willamette River with an overburden of only eight meters as well as some buildings' foundations. A bold undertaking - the settlement had to be limited to 1.3cm on this critical section. The jobsite teams celebrated a successfull breakthrough with the two machines in January and July 2005, respectively, and as early as autum 2006 the "West Side Tunnel" was put into operation.

The third Mixshield, S-348, - called "Rosie" - commenced its advance for the "East Side Tunnel" in June 2007. Rosie celebrated breakthrough in October 2010. The three Mixshields produced a total of 14.4 kilometers of sewage tunnel.

The new storage tunnels had to be connected to the existing sewage lines. A Herrenknecht microtunnellling machines excavated on the eastern river bank of the Willamette River nine drives in total with a total length of 2,393 meters through sand, gravel and loam. Despite encountering rail spikes and pile moorings in the underground, the machine marked a milestone for long-distance drives on the "Outfall 46" section: within 1.5 months the AVND2000AB accomplished an American record. The jobsite team drove with a length of 938 meters the longest microtunnel in the US that had been produced by machine without the use of a single intermedia shaft.

The AVND1800AB on the western river bank was an equal match. The best daily performance amounted to impressive 58 meters in 24 hours. And it could be extended in diameter fast and with very little effort only.