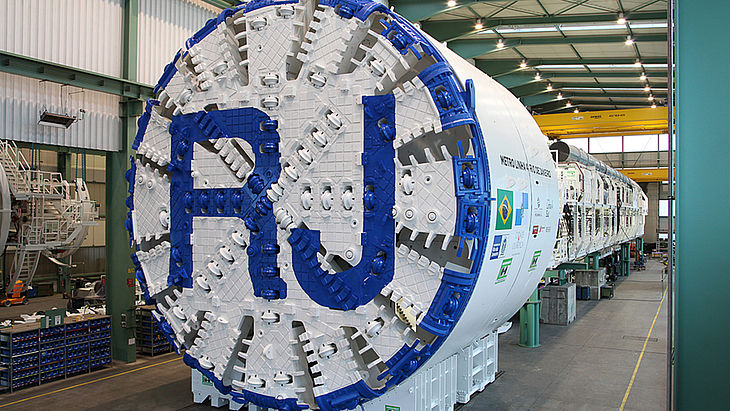 In 2014, Brazil will host the FIFA World Cup and two years later, in 2016, the Summer Olympic Games will take place in Rio de Janeiro. In between times, the city will celebrate its 450th anniversary in 2015. The Government of the Federal State of Rio de Janeiro is therefore investing in a series of infrastructure projects to improve the traffic situation for the around eleven million inhabitants of the conurbation and the guests to be expected. One of the large-scale projects is the construction of the new metro Line 4 with a total length of 14 kilometers.

In summer 2012, UNESCO declared the city of Rio de Janeiro a World Heritage Site. The city is home to the largest inner-city forest in the world. Around one quarter of the city's surface is covered by mountainous landscape with steep, unaccessible slopes in some parts. As a result, the city's population density is high and its transport infrastructure, which is chronically congested and must be urgently extended, is under a great deal of pressure. In addition to the two existing metro lines with a total length of around 41 kilometers, the new "Linha 4" along the Atlantic Ocean is to produce an efficient link between Barra de Tijuca in the west and the Ipanema city quarter. From Ipanema, metro line 1 runs towards the city center where the Maracanã Stadium is being modernized for the FIFA World Cup and the Olympic Games.

Herrenknecht delivered a tunnel boring machine of the Multi-mode TBM type (Ø 11.46 meters) for the 4.6-kilometer-long stretch of the new Line 4 between the "General Osorio" and the "Gavea" stations. On September 27, 2012, the customer accepted the machine at the Herrenknecht plant in Schwanau, in the presence of a representative of the government of the Federal State of Rio de Janeiro, State Secretary Regis Velasco Fichtner Pereira. It is a premiere for Brazil's second largest city because, for the first time ever, a tunnel boring machine will be used after all former tunnels have been excavated with conventional tunnelling methods or built in the open construction mode.

In order to deal with the variable ground conditions along the tunnel route, Herrenknecht engineers designed the machine in such a way that the tunnelling mode can be converted inside the tunnel with relatively little effort. In the open mode, the stable hard rock (gneiss) is removed via a belt conveyor. In the closed EPB mode, the material is conveyed by a screw conveyor which, at the same time, uses the conveying speed in relation to advance speed to safely and precisely control the support pressure when tunnelling through mainly sandy grounds. Another special feature of the machine for Rio de Janeiro's line 4 is the steering joint in a diameter range of more than eleven meters. This joint helps the tunnelling team to deal with small curves with radii of only 250 meters in some parts. December 30, 2013 was the first day of tunnelling in Rio de Janeiro when the Herrenknecht Multi-mode TBM started excavating the first meters. On April 10, the tunnelling shield completes its current mission with the breakthrough to a cavern between the stations „A. Quental“ and „Gavea“.

The segment moulds for the production of the around 19,000 concrete segments for tunnel lining were delivered by the Group's subsidiary Herrenknecht Formwork. In addition, Herrenknecht delivered the navigation system (VMT), the tunnel belt (H+E) as well as multi-service vehicles for material and personnel transport (Techni-Métal Systèmes) for the operation of the machine.