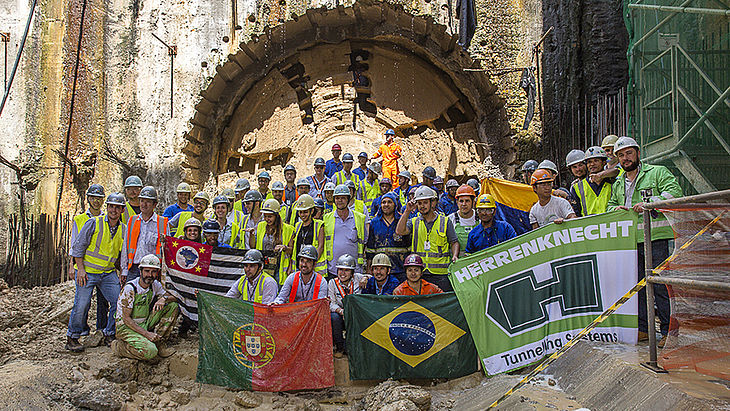 In the southwest of São Paulo runs Line 5, which is being extended as far as the city center and is to be connected to the rest of the metro network. The extension is being built partly as a single-tube double-track tunnel and partly as a twin-tube single-track tunnel.

The EPB Shield that proved itself in the construction of Line 4 was refurbished for Line 5 by the local Herrenknecht subsidiary in Brazil in cooperation with the specialists from Schwanau. The diameter was enlarged by about a meter to 10.54 meters so it could excavate the double-track sections. Two other EPB Shields with a smaller diameter (6,860 mm) were responsible for driving the single-track sections. Their cutting wheels were designed so that, depending on the geology, the cutting knives for softer soils could be replaced with disc cutters for hard rock. For the tight curves in places, both machines have steering articulation.

After weekly top performances of up to 150 meters, in late November 2015 and mid-February 2016 the two 6.86 meter machines successfully completed their drives for Line 5. The final breakthrough of the large-diameter machine on June 20, 2016 completed the successfull mission of the Herrenknecht TBMs for Sao Paulo’s Metro Line 5.