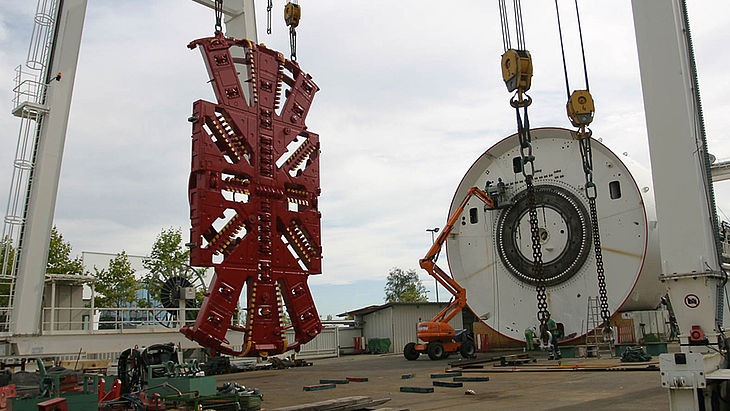 Gdansk with its freight and ferry terminal and airport is not only a major transportation hub in Poland but also important for the transport connections from Scandinavia to Central and Eastern Europe. The new, 10-kilometer-long "Słowacki Route" will improve the transport infrastructure in the Gdansk conurbation - also bringing advantages for the over one million people in the agglomeration area. It will connect "Lech Wałęsa Airport" with the highway towards Warsaw and with the Gdansk deep-sea port, one of the most important trading hubs in Eastern Europe.

The "Słowacki Route" will cross beneath the Vistula river with a 1.4-kilometer-long dual-tube tunnel. Each of the tunnels will accommodate two lanes and will be connected with each other by seven crosscuts for escape routes. For the construction of this major tunnel project, the construction companies ordered a slurry-supported Mixshield with a diameter of 12.56 meters from Herrenknecht.

The machine and the construction crews have to cope with demanding tunnelling operations (2 x 1,076 meters) at depths of between 9 and 35 meters beneath the Vistula: In parts, there are only about 6 meters of ground between the machine and the river bed. The machine is sealed against the penetration of ground water or soil, which can have pressures of up to four bar, with a triple brush seal and a quadruple sealing system between the shield skin and the segment. The technology has been designed in such a way that even the steep gradient at the beginning and the slope in the second half of the tunnel - each 4 percent - can be excavated.

Since the start of tunnelling in June 2013, the XL tunnel boring machine achieved best performances of up to 122 meters per week. On November 30, 2013, the Mixshield excavated the last meters of the first tunnel and broke through to the target shaft. The machine was turned around for driving the second tunnel starting in March 2014 in opposite direction following a detailled inspection and revision. As early as June 9, 2014, the successfull breakthrough was celebrated at the target shaft after best performances of up 132 meters per week in the second tunnel. Top-ranking politicians from Gdansk and from the Polish government emphazised the enormous effort by all members of the project‘s team building the tunnel and thereby enhancing the city’s economic strength.

The Group's subsidiary Herrenknecht Formwork produced the moulds in which the segments for lining the tunnel tubes are made. In addition, Herrenknecht as a full-service provider in tunnel construction delivered further equipment at the customer's request: the separation plant and the pumps for the slurry circuit in the tunnel, the compressor station, the navigation system (VMT), the start-up construction and equipment for the materials and personnel transport in the tunnel (MSD). Herrenknecht specialists support the customer's staff with service and equipment for on-site assembly of the machine up to successful completion of the project.