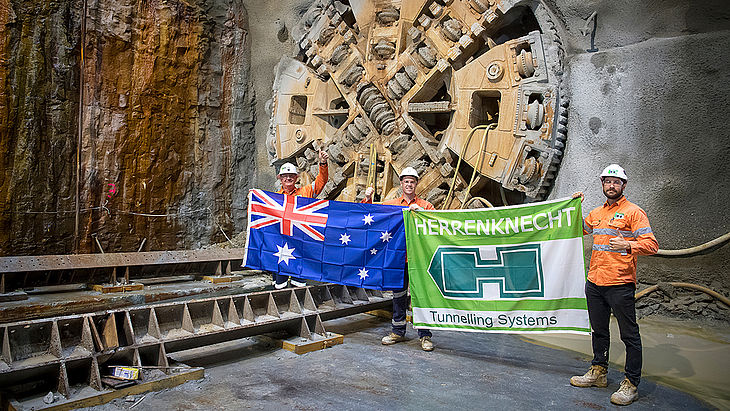 Sydney is committed to the sustainable development of an environmentally friendly public transport network. Sydney’s newest railway is being built largely beneath the New South Wales state capital and is at the forefront of mass transit investment in the country as a whole.

For Sydney Metro City & Southwest, the tunneling contractor, John Holland CPB Ghella joint venture (JHCPBG), used five Herrenknecht tunnel boring machines (TBMs) to excavate a total of 31 kilometers of tunnel. Four Double Shield TBMs excavated the sections north and south of Sydney Harbor. A mixshield dug its way under Sydney Harbour – with an overburden of up to 35 meters to the bottom of the harbour and a water depth of up to 40 meters.

Throughout the project, the site team was supported by Herrenknecht's subsidiary in Brisbane. Before they started, the JHCPBG’s personnel were trained in ring building and tool changing and completed workshops with experienced machine operators. During tunnelling operations, Herrenknecht engineers were on hand to provide advice and support to the project participants. "We could always count on Herrenknecht to respond quickly and work with the joint venture to implement the necessary modifications," says Martin Bell, site manager for the JHCPBG.

All the tunnel boring machines used on the Sydney Metro City & Southwest project were project-specific and adapted to local conditions. The Double Shield TBM cutterheads were wear-protected and equipped with powerful and resilient tools to optimally remove the highly abrasive Hawkesbury sandstone. Double Shield TBMs combine the functional principles of Gripper and Single Shield TBMs in one machine. In stable geologies, combining these methods permits the installation of concrete lining segments parallel to the drive, resulting in very high performance rates. The four Double Shield machines were shipped to Sydney and transported to the launch shaft in the largest possible modules. They were thus ready for use just six weeks after delivery – a process that normally takes two to three months.

The Mixshield TBM type is optimally suited to the tunnel section under the harbour. With it, heterogeneous geologies such as in Sydney and high water pressures can be mastered safely. Precise control of the support pressure is provided by an automatically controlled air cushion. Two independent man locks, each with two airlock chambers, are installed for safe cutting tool changes. The ground conditions at the beginning and end of the Mixshield tunnelling section were surprising due to the higher clay content. This led to clogging of the cutting wheel in the first section, which reduced the advance rate somewhat. By adapting the cutting wheel design and the flushing concept, Herrenknecht reacted quickly to the prevailing conditions.

Start of tunnelling in 2018

Tunnelling of the two drive sections south of the harbour from Marrickville to Barangaroo began in late 2018. Slightly offset on parallel tunnel alignments, TBMs "Nancy" and "Mum Shirl" began digging their way northward through the subsoil of Australia's largest and busiest city. The three machines for the northern sections from Chatswood to Blues Point, as well as the harbour crossing, began their drives in 2019.

On March 16, 2020, after crossing the harbour basin with water pressures of up to 6 bar, Mixshield "Kathleen" made the final breakthrough of the project at Blues Point. This completed tunnelling for Sydney Metro City & Southwest. Thirty-one kilometers of new metro twin tunnels were built in just 17 months. Top performances of up to 85 meters of tunnel per day and 324 meters a week and excellent machine availability of around 99 percent were achieved. Martin Bell sums up the project as follows: “Our own people were very happy with the design and operability of the machines. If the crew make good progress underground, they like coming to work. And then the project is a success."

Herrenknecht already took the high Australian safety standards into account when designing the tunnel boring machines. The specific modification of the air filter systems, for example, played a major role in tunnelling on Sydney Metro: since the so-called Hawkesbury sandstone consists largely of silica and the presence of quartz dust poses a health risk, filters must be as close as possible to any source of dust.

The project also benefited from the integration of additional equipment and services related to tunnelling: whether H + E for belt conveyors, VMT for navigation equipment or GTE to supplement the site crew: the well-rehearsed coordination processes between the companies contributed to the team's success.The Sydney Metro City & Southwest will open in 2024. The Metro North West Line opened in May 2019. The new metro with a capacity of up to 34,000 passengers per hour is the first in Australia to operate fully automatically.

Herrenknecht All Around Online Magazine #12 Building up down under