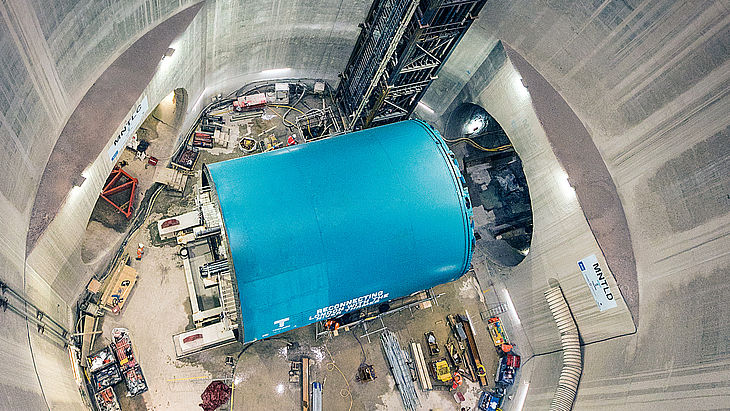 Thames Tideway Tunnel
United Kingdom, London
For a cleaner Thames – and better life on the river

The Thames Tideway Tunnel is a real once-in-a-century project for environmentally friendly and healthy sewage disposal in the metropolis of London. Herrenknecht is involved in this groundbreaking structure with three tunnel boring machines for more than 17 of the total of over 25 kilometers of the sewer tunnel system at depths of 30 to 66 meters.

The existing London sewer system is already more than 150 years old and was designed by its creator, Sir Joseph Bazalgette, to serve a population of 4 million. Today nearly 9 million people live in the British capital. As a result, the old sewers are completely overloaded: every year, tens of millions of tonnes of untreated sewage flows into the Thames.

In future the new XXL sewage tunnel – also known as the "Super Sewer" – will remove 90 to 95 percent of it, thus ensuring significantly better water quality in the Thames. The effluent will then flow via the Lee Tunnel, also completed with Herrenknecht's support in 2016, to the upgraded Beckton Sewage Treatment Plant for water treatment and from there, cleaned and treated, into the Thames. Thus, the completion of the Thames Tideway Tunnel not only marks the beginning of a whole new era of sewage disposal in the megacity. The improved water quality will also enhance life on the river. In addition, for the first time in generations, the new tunnel system creates new space for public life along the Thames in seven areas of public park. An added benefit that has immense value given London's land prices.

But not only the final state of the project is ecologically valuable, in carrying out the project itself, developer Tideway is equally committed to sustainability. Around 95 percent of the material has been transported by boat. That’s more than 4 million tonnes of material. Each boatload is equivalent to about 93 trucks, and in total, 250,000 truck journeys through the city have been avoided.

With Rachel, Annie and Selina through London's underground
The three Herrenknecht tunnel boring machines, the Mixshields Selina and Annie and the Earth Pressure Balance Shield Rachel, were also shipped to London. The machines got their names after a public vote, in honor of inspiring London women. TBM Rachel commemorates Rachel Parsons, founding president of the Women's Engineering Society and a former resident of Fulham. Annie Scott Dill Maunder (née Russell) was the first female scientific astronomer at the Royal Observatory in Greenwich. Dr. Selina Fox founded the Bermondsey Medical Mission in 1904, a small hospital for the poor and disadvantaged, in particular women and children. It is still active today as a charitable institution.

TBM Rachel was the first Herrenknecht machine in the Thames Tideway Tunnel. After its journey by boat from Kehl to London, Herrenknecht specialists on site took care of assembly on the jobsite. On May 10, 2019, the 1,350 tonne machine with a diameter of 8,100 millimeters began its underground journey from Carnwath Road Riverside to Acton at a depth of 35 meters. After 6,892 meters it achieved its final breakthrough on September 24, 2020.

In December 2020, the slightly smaller but still around 100 meter long and 960 tonne TBM Annie set off on its journey. With a blessing and the traditional protection of Saint Barbara, the 6,410 millimeter Mixshield machine began construction of the 4,615 meter long Greenwich connecting tunnel at the Greenwich Pumping Station. At Chambers Wharf it connects most of London's southeast to the Thames Tideway Tunnel.

In January 2021, at a depth of 60 meters, the Herrenknecht Mixshield Selina began the final sprint of the Super Sewer: it started digging the eastern, deepest tunnel section over a length of 5,530 meters – from Chambers Wharf to Abbey Mills Pumping Station, 66 meters below the city. Before the successful start of tunnelling in London, the Herrenknecht engineers and contracted logistics specialists had a truly difficult task: in order to be able to assemble the machine at the launch shaft in London as efficiently as possible, the shield machine with its cutting wheel was to be shipped from Germany to the UK in one piece, i.e. not dismantled into smaller segments as is usually the case. Thus when it was loaded at the Rhine port of Kehl, it was the heaviest piece of cargo in the company’s history: 950 tonnes.

In addition to the three tunnel boring machines Rachel, Annie and Selina, Herrenknecht also supplied the Thames Tideway Tunnel with two newly designed machines for the "C 410 Central Section" construction lots. The two machines follow the formwork carriage used there for the secondary lining of the tunnels and are the unloading and transfer stations for the trains delivering concrete for the formwork carriage in the tunnel. The back-ups for supplying the formwork carriage can accommodate two trains on two parallel tracks. They also dismantle the tunnel installations left over from the TBM drive.

Herrenknecht's teamwork has thus helped make the largest infrastructure project in the British water industry a success: for a cleaner Thames and a better and healthier life for millions of people in the British metropolis. The project is scheduled to be completed in 2024.