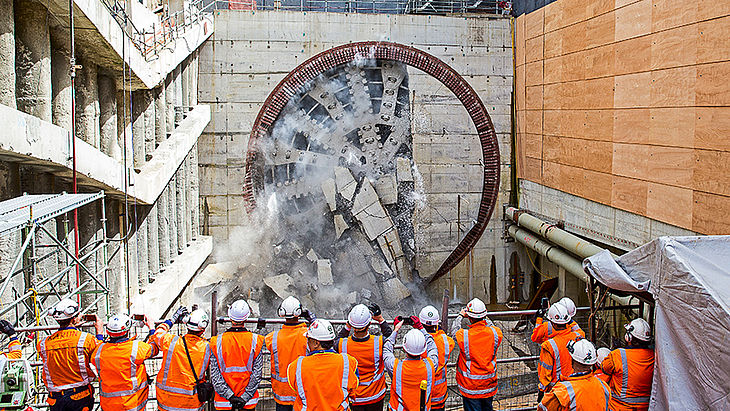 On October 31, 2013, New Zealand Transport Minister Gerry Brownlee and Auckland Mayor Len Brown gave the starting signal for the tunnelling of the Waterview tunnel in Auckland. The twin tube, 2 x 2.4 kilometer long road tunnel is part of the New Zealand Transport Agency’s Waterview Connection, the largest and most ambitious infrastructure project New Zealand has undertaken to date. Tunnelling is being done by a Herrenknecht EPB Shield, one of the world’s largest tunnel boring machines with a diameter of 14.41 meters. The machine’s name of “Alice” was chosen in a school competition.

The Waterview Connection connects two highways in the west of Auckland. The direct connection of the airport to the city center will bring a reduction in journey time of around 15 minutes. Minister Brownlee on the major project: "This section of road will connect the Southwestern and Northwestern motorways, completing the long awaited Western Ring Route. It represents a significant investment by the New Zealand government in the strategic motorway system Auckland needs to support its population and economic growth.”

Herrenknecht is supplying an EPB Shield to New Zealand customized to the requirements in Auckland. Below a near-surface layer of hard basalt of volcanic origin, sandstone and siltstone deposits (East Coast Bays Formation and Parnell Grit) dominate along the tunnel alignment. The overburden is a maximum of 40 meters above the tunnel. The Herrenknecht engineers designed the cutterhead (powered by 24 motors with a total of 8,400 kW) especially for these conditions and precisely matched opening ratio and tooling. The openings in the cutting wheel allow optimal transport of the excavated soil to the screw conveyor. From the screw conveyor the excavated material is passed to a belt conveyor, delivered to New Zealand by the Herrenknecht Group company H + E. The excavation tools in the cutting wheel can be changed from the rear. When harder rock is pending, the cutting knives can be replaced with disc cutters (diameter 17 inches).

The 2,800 metric ton borer navigates through the subsoil with extreme precision. The data for controlling the machine is provided by a system developed by VMT GmbH. The production, storage and use of the concrete segments are also controlled by a system supplied by VMT. Tunnelling specialists from Global Tunnelling Experts help the client’s team operate the system.

The package provided by Herrenknecht also includes a customized back-up system independent of the tunnelling machine. With its help and concurrent to the tunnel excavation, the tunnellers prepare the invert of the tunnel lined with concrete segments for the installation of supply and disposal lines. This back-up concept made it possible to keep the length of the EPB Shield down to a relatively short 87 meters. Particularly, the system enhanced the efficiency of both, the tunnelling and the lining of the invert, due to the independence of TBM and back-up system.

The first stage was won on September 29, 2014: After only 11 months, with up to 452 meters of tunnel built per month, "Alice" broke through to the shaft at the northern end of the first tunnel. Followed by a thorough inspection of all components, the colossus was turned around with a spectacular 180-degrees maneuver to drive the second tunnel back in southern direction. The jobsite's competence team managed this feat with bravoura and exactly as scheduled. The cutterhead started turning again in Auckland's underground in December 2014 and the final breakthrough was celebrated on October 19,2015.

Assembly and factory acceptance of this giant took place in the Herrenknecht factory in Nansha, China in March 2013. Core components such as the main drive, hydraulic unit, power unit and compressed air locks were manufactured at Herrenknecht headquarters in Schwanau and delivered to Nansha for final assembly.

For more information and film footage about the project: