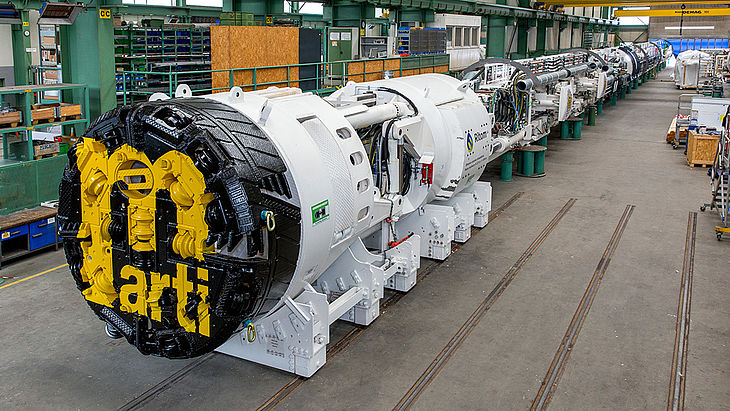 100 years ago the Swiss Gotthard railway was electrified when the Ritom hydropower plant (Pioratal, Ticino) went into operation. Back then already, the miners struggled against the complex geology of the Gotthard massif. The ideal underground alignment could not be realized with the resources at the time. Overground penstocks have characterized the appearance of the mountain ever since.

From the 1960s, engineers have been planning a modern and efficient pumped storage system.  As part of the complete replacement of the power plant, this is now to be implemented and an underground pressure tunnel is to be built in three construction phases. The centerpiece, the middle, around 1,500 meter long inclined shaft, is being excavated with a completely redesigned Herrenknecht Gripper TBM.

The project is unique. The hard rock machine manufactured at the main Schwanau plant starts its drive 600 meters deep in the rock in a cavern created at Lake Ritom. After a 901 meter long ascent of 23 degrees and crossing under the river Foss, the TBM presses itself into the rock mass for a 633 meter long steep ascent of 42 degrees. This represents an extreme gradient of 90 percent. The 95 meter long, 290 tonne machine is reliably prevented from slipping backward on the one hand by the gripper and on the other by a specially designed and already proven knuckle lever device in the anti-slip gripper unit. The machine thus remains securely wedged in the rock mass at all times.
Because, however, the relatively small machine diameter of 3.23 meters made the knuckle lever mechanism difficult to access, a technical innovation and optimization by the engineers was required. During the drive it can now be conveniently adjusted mechanically using wedges moved by cylinders.

Completion of the structure is planned for spring 2022.