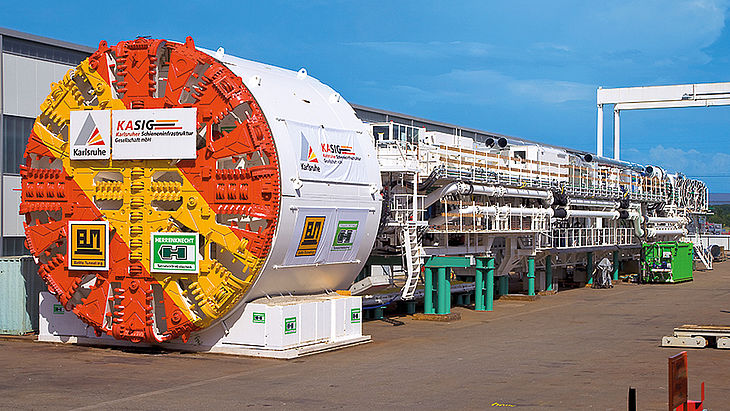 On an average day, every minute a city train or tram runs through Karlsruhe's pedestrian zone in each direction. The downside of the easy access to the city center for the Karlsruhe Transport Authority's more than 178 million passengers a year is disruption by constant through traffic. More and more frequently the trams and trains are backed up in congestion. The answer is the „Kömbilösung“ („combi solution“), for which a Herrenknecht Mixshield (Ø 9.290 mm) bored a 2,046 meter long large tunnel under Kaiserstrasse. At the heart of the Kombilösung are a tunnel under the pedestrian zone for city trains and trams and a parallel car tunnel to the south.

After formal factory acceptance in Schwanau in June 2014 with representatives of the construction company and the client, Karlsruher Schieneninfrastruktur-Gesellschaft mbH KASIG, four months later the machine stood fully assembled in the launch shaft at Durlacher Tor. At the open day on October 26, 2014 around 15,000 people interested in tunnels took the opportunity to get a tour of the site and an explanation of the Herrenknecht machines.

In November 2014 the site crew launched the machine christened "Giulia", heading west. In sandy and gravelly subsoil and with a shield diameter of 9.29 meters, a machine weight of around 1,300 tonnes and a total length of around 85 meters, in places they had to cope with overburdens of just 4.50 meters. With all involved working together as a team, delays in the advance were overcome and made good again after weekly best performances of up to 150 meters.

The breakthrough exactly on target at Mühlburger Tor on September 2015 was achieved thanks also to the high-precision navigation system TUnIS from Herrenknecht Group company VMT GmbH in neighboring Bruchsal. The breakthrough also signaled the start of work on the final lining of the tunnel as well as the extensive connection works. With the planned commissioning in late 2018 the city trains and trams will thus disappear underground and Karlsruhe's Kaiserstrasse will become even more attractive as a pedestrian zone.