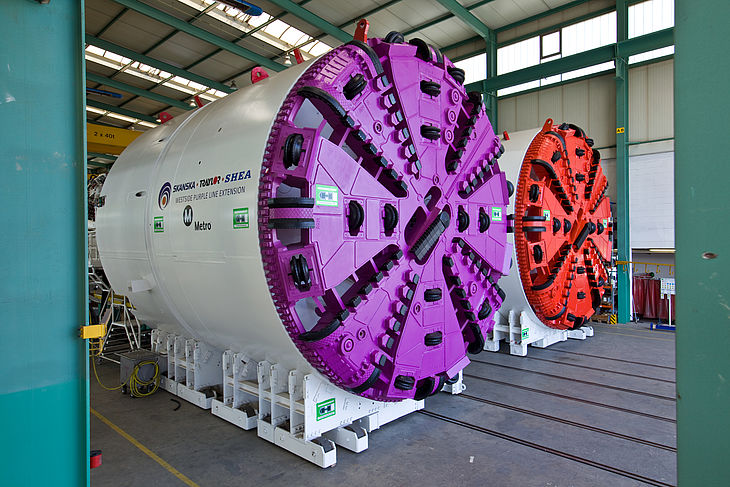 Six Herrenknecht EPB Shield tunnel boring machines in Los Angeles are pushing ahead with the much-needed upgrading of the subway and thus the city’s public transport capacity.

From May 2016 and April 2017, the earth pressure balance shield (EPB) "Harriet" worked her way forward underground for a section of the Crenshaw/LAX Transit Corridor. The Herrenknecht TBM (Ø 6.51m) first drove a 1.6km long tunnel between the future stations Expo/Crenshaw and Leimert Park. Then it was disassembled and transported back to the launch shaft for the second, parallel route. In April 2017, "Harriet" completed her mission below Los Angeles with the second breakthrough in the target shaft at the Leimert Park station. Record-breaking advance rates of 43 meters in 24 hours with an EPB shield of this size established a new best performance for the city of Los Angeles – four more times, 40 or more meters per day were excavated. With weekly top performances of 170 meters, the Crenshaw/LAX Transit Corridor is expected to begin operations on schedule in 2019.

In February 2017, the starting signal for the earth pressure balance shield "Angeli" was given for a section of the Regional Connector Transit Corridor. It serves to link existing metro routes of the Gold, Blue and Expo lines to new and faster direct connections. From 2020 this will allow locals and visitor to travel north-south from Azusa to Long Beach and east-west from East Los Angeles to Santa Monica without changing. "Angeli" completed the first of two 1.7 kilometer long tunnelling sections on July 18 with a successful breakthrough to the 4th Street target shaft. The final breakthrough was celebrated by miners and project managers on January 16, 2018. Prior to that, the project's best performance of 150 meters of tunnelling per week had been achieved in November 2017.

For the westward extension of the Purple Line, the contractors order six EPB Shields from Herrenknecht. From October 2018 to May 2021, the two EPB Shields "Elsie" and "Soyeon" will each drive 5.25 kilometers of new subway tunnel. High levels of hydrogen sulfide gases make it necessary to develop a particularly large ventilation system to clean the air around the clock. Due to the presence of methane gas, all TBM components are also explosion-proof.

Two Earth Pressure Balance Shields each are used for Phase 2 and Phase 3 of the Purple Line extension.